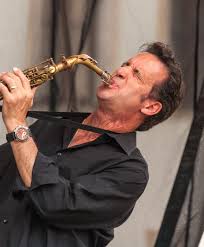 The first event at this year’s Wigan Jazz Festival involves the saxophone section from Wigan Youth Jazz Orchestra playing a specially arranged piece (by Richard Halliwell) in Terminal 3 of Manchester Airport. This is all by way of welcoming American saxophonist ERIC MARIENTHAL (lead alto with Gordon Goodwin’s Big Phat Band also formerly with Chick Corea’s Elektric band) to the UK and specifically to the North West & Wigan. He is travelling from Los Angeles (supported by Yamaha) to perform with WYJO on Friday 8th July in a special concert to celebrate the 40th Anniversary of WYJO.

An added feature of the programme are talks held each morning of the event. This year the presenters are: GUY BARKER (Friday) ANDY PRIOR (Saturday) and CHRIS BARBER (Sunday)

This is the 31st Jazz Festival to be staged in Wigan and main sponsor of the event is Manchester Airport.