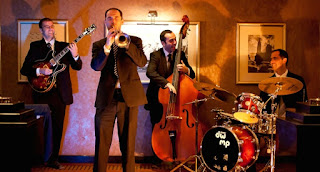 The band ? The Chris Coull Quintet whom we aim to reunite here once a year.  I asked Chris for this year`s snappy intro, and this is what he wrote: "Blistering be-bop and west coast jazz classics from longstanding Hornby visitor Chris Coull, trumpet; legendary Mancunian pianist Rick Wetherall, and up and coming saxophone star Jake Steels. Support from local, Cumbrian stalwarts, Rob Steels, double bass, and Jack Davies drums"

So there you have it, except that Chris is too modest to say that this erstwhile Miles disciple, whose music I`ve been following since first hearing him  and his band at Appleby in February `96, has now developed a distinctive voice of his own plus a formidable technique. Rob and Jack were in that original band. Rob`s son Jake, now studying saxophone at the Birmingham Conservatoire, was then still in his pram.

Although this widely scattered group (Chris lives in Hove !) only meet once a year in Hornby, to hear them is to think that play together all the time. They never fail to have the place in uproar..