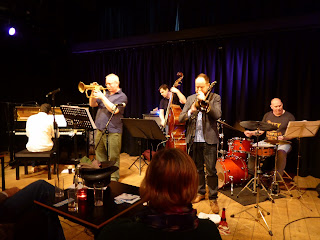 From Mike Gordon: exciting line up of bands to tempt you over to Scarborough this summer - bring the bucket and spade too!

June
1: Ingrid Jensen Quartet
Hailed as one of the most gifted trumpeters of her generation, Ingrid Jensen has worked in New York for over 20 years playing with GRAMMY award winning ensembles. The quartet features three exceptional UK musicians - Jez Franks, guitar, Andy Champion, bass and Tim Giles, drums. The Quartet is part of a NORVOL Funded Tour. £8 (£7 in advance).

8: Roan Kearsey-Lawson
A superb vibraphone player, Roan’s playing is packed with energy, visually stunning on fast numbers
and with mesmerising intrigue on slow ones, playing a mix of swing and latin standards. He has a dry sense of humour too. With Alastair Lawrence, piano, Paul Baxter, bass and Tom Townsend, drums. £6.

15: Players’ Night
Variety! Talent! Surprises! This is what you can expect on Players’ night. Anyone who frequents Scarborough Jazz and would like to play some jazz is welcome to perform, and the resident trio will be happy to provide backing if required. Please contact Mike Gordon (01723 379818) if you would like to take part. It’s a fun night. £4.

22 Will Powell
Will Powell is a popular Leeds based guitarist and bandleader whose melodic improvising was much in evidence when he played with singer Liane Carroll at Seven Jazz last year. Backed by MG3. £4.

29 Mark Chandler and the "Bobby Shew Project"
Flugelhorn and trumpet player Mark has played with some of the biggest names in jazz and show business in a 40 year career. The night will feature Mark’s transcriptions of the boporiented album of jazz standards ‘Heavyweights’ by Bobby Shew and Carl Fontana. With Kevin Holbrough, trombone, Jamil Sheriff, piano, Paul Baxter, bass and Dave Walsh, drums. £7 (£6 in advance).

July
6 Ben Lowman
Returning after his first appearance at the club, Ben plays tenor sax, flute and clarinet as well as composing and arranging. A graduate of Leeds College of Music with first class honours, Ben has full, warm tone to match his creative skills. With MG3. £4.

13 Thom Whitworth
A return visit has the double pleasure of hearing Tom’s imaginative improvising on trumpet - a tone and fluency reminiscent of Clifford Brown and Chet Baker - and guitar, with influences of Pat Metheny and Wes Montgomery. With MG3. £4.

20 Simon Beddoe
Trumpet and flugelhorn player inspired by Miles Davis, Freddie Hubbard and Donald Byrd, Simon
is at the forefront of some of the UK’s most innovative music including Submotion Orchestra, a  band combining percussive electronica, jazz and soul. MG3. £4.

For more details, go to our website: www.scarboroughjazz.co.uk. Doors at The Cask open 8.00pm.