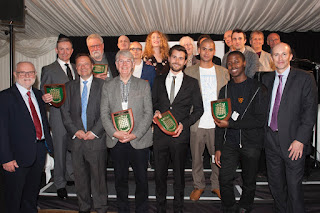 The winners of the 2016 Parliamentary Jazz Awards were announced last night on Tuesday 10 May. The Awards, organised by the All Party Parliamentary Jazz Appreciation Group (APPJAG), are considered Britain’s premier ceremony for the UK jazz community.

Featuring a broad array of jazz talent from within the industry, the awards are once again sponsored by music licensing company PPL. The organisation is dedicated to ensuring that all those that invest their time and talent in making music are paid fairly for their work, licensing recorded music in public and broadcast on behalf of its performer and record company members – a number of whom are from the jazz community.

During the ceremony, award presenters comprised of a host of British politicians and home-grown UK jazz talent including; clarinettest and composer Arun Ghosh, PPL Chairman John Smith, luminary jazz vocalists Claire Martin and Jacqui Dankworth and, Member of Parliament Baroness Coussins.  Compére for the evening was editor and publisher, of Jazzwise, Jon Newey: “This has been a really strong year for the Parliamentary Jazz Awards in terms of talent and nominations. The well deserved winners are a veritable who’s who of names that have made a real impact on the music and helped make the UK one of the world’s leading jazz territories.”

Jazz Vocalist of the Year: Emilia Mårtensson
Emilia Martensson is a London based Swedish/Slovenian vocalist and has built a reputation as one of the most exciting young vocalists on the UK jazz scene.  Her critically acclaimed contributions to Kairos 4Tet helped them to bring home a 2011 MOBO Award, while her distinctive voice led The Observer to deem her “The new face of British Jazz 2012”.  Her most recent album Ana features her own songs and is an evocative reflection of her Swedish roots, bringing in folk and classical influences which prompted Jazzwise to write, “Exquisitely beautiful songs….Martensson has struck gold”.  In 2015, she was chosen to take part in the Take Five professional development programme run by Serious and commissioned by the EFG London Jazz Festivlal.

Jazz Instrumentalist of the Year: Alexander Hawkins
Alexander Hawkins is a British pianist, organist, and composer. In addition to work with his long-established Ensemble, he also leads the Alexander Hawkins Trio, and is a frequent solo performer. Through his work in the group Decoy, he has been called 'the most interesting Hammond player of the last decade and more', and has 'already extended what can be done on the instrument'. In 2012, Hawkins was selected as one the first group of young composers to be part of the London Symphony Orchestra's Soundhub programme, and has since been commissioned by the likes of BBC Radio 3, and the London and Cheltenham Jazz Festivals. Hawkins regularly performs across Europe and beyond, and has featured on upwards of 25 albums.

Jazz Album of the Year: ‘Let It Be Told’ Julian Argüelles (Basho Records)
‘Let It Be Told’ is Julian’s 12th album as a leader released April 2015. It is a collaboration with the HR big band with thrilling arrangements of powerful, vibrant compositions by exiled South African artists known as the Blue Notes, some of whom were living in the UK during the years of apartheid, and features Django Bates and Julian's brother Steve Argüelles. The arrangements on this album remain true to the joyful spirit of the original compositions, while giving them a harmonic richness and depth. Julian is undoubtedly one of our finest jazz artists, respected and recognised internationally. He has been an integral part of the UK jazz scene for over 3 decades now and worked with artists ranging from Dave Holland and Bill Frisell, to Kenny Wheeler, John Taylor, Carla Bley and John Scofield. He has received countless commissions and awards for his playing, CDs, composition and arranging.

Jazz Ensemble of the Year: Empirical
Talking to The Guardian in 2008, double-bassist Tom Farmer - a founder member of Empirical - remarked that ’empiricism is about observing and experimenting, not having a theory first and trying to prove it.’ At that time, all the band members were still conservatoire students, but they had already been hailed as ‘the most exciting band to come out of the UK’ by Courtney Pine, won the Rising Stars prize at Holland’s high-profile North Sea Jazz Festival, brought a Toronto concert-hall audience to its feet at an international gathering of jazz educators, and impressed the locals in that most demanding of jazz cities, New York. That year, trumpeter Jay Phelps and pianist Kit Downes left, and young vibraphone virtuoso Lewis Wright came in to join Farmer, saxophonist Nathaniel Facey, and drummer Shane Forbes. Since then, the membership has been constant, and so has the Empirical philosophy of curiosity, experimentation and development.

Jazz Newcomer of the Year: Binker and Moses
Tenor saxophonist Binker Golding and drummer Moses Boyd startled the British jazz world last year when they released their debut album Dem Ones. Most young musicians would have opted for the more conventional trio or quartet setting, but this duo crackled with the kind of stark energy and daring ideas that one would expect from older players. However, both are graduates of the Tomorrow’s Warriors school who have made an essential contribution to the music of award-winning double bassist Gary Crosby, vocalist Zara McFarlane and pianist Peter Edwards. Binker and Moses have an impressive maturity well beyond their tender years.
Jazz Venue of the Year: Seven Jazz Leeds
Over the past nine years, Seven Jazz has evolved into a highly successful voluntary jazz promoter based in Chapel Allerton in Leeds. Since September 2007 they have hosted hundreds of concerts and stood the test of time through an ever changing city landscape. However it is the way they have built the club as a community for Leeds’ jazz scene that is most impressive. Steve Crocker and his team host two regular concert series, a small festival and a programme of education that unites jazz fans and musicians alike. The club allows the opportunity for anybody with interest an accessible way into the music and their varied programming allows a vast array of styles to their stages and their demographic (both age and diversity) in performers is well balanced.

Jazz Media Award: Jez Nelson/BBC Jazz on 3
Synonymous with the cutting edge of jazz broadcasting for 18 years, Jazz On 3 is a veritable institution, and Jez Nelson, who presented the programme so engagingly, is an inspiring figurehead. Throughout its lengthy run the show provided a platform for many of the more challenging figures in improvised music, recording superb live sessions by anybody from Evan Parker to David S. Ware and Joe Lovano. Furthermore there was a range of excellent features on different aspects of both the history of jazz and the life of a jazz musician that greatly helped to demystify and ‘humanize’ the artform.

Jazz Education Award: Professor Dr Tommy Smith
Professor Dr Tommy Smith is a leading light in European jazz, first and foremost as one of the finest saxophonists of his generation, and latterly as the founder and current director of The Scottish National Jazz Orchestra (SNJO). These career-defining achievements are framed by his status as an international recording artist; a composer and arranger of extraordinary ambition; and not least, as a jazz educator.

His tenure with the SNJO has seen critically acclaimed performances and recordings of programmed and commissioned works including hugely popular treatments of Ellington, Gershwin, Mozart, Weather Report and Miles Davis.  Tommy Smith is also founder/director of The Tommy Smith Youth Jazz Orchestra and is current Artistic Director of the first ever full-time jazz course at the Royal Conservatoire of Scotland.

Services to Jazz Award: Mary Greig
As a young woman in the the late 1970s - 80s, Mary Greig was intensely involved with the London jazz community - organising weekly jazz clubs and summer courses for Jazz Centre Society (the forerunner of Jazz Services and Jazz UK); representing jazz on arts funding panels; organising jazz-related events and working in a jazz record shop. Her passion for jazz led her to take up the production and publication of Jazz in London, a free monthly guide to live performance of contemporary jazz in London and the suburbs.

Special APPJAG Award: Evan Parker
The standup comic Stewart Lee, an unexpectedly well-versed enthusiast for what’s sometimes dubbed ‘the sharp end’ of creative jazz, regards the now 71 year-old saxophonist Evan Parker as ‘the greatest living exponent of free improvisation’, and plenty of the jazz cognoscenti have shared that view as this unique maestro’s sound has liberated countless young saxophonists round the world, and the thinking of adventurous composers and bandleaders too.

Special APPJAG Award: Michael Connarty
Michael Connarty was elected to Parliament in 1992 and quickly established himself as a fan and supporter of Jazz. Michael was Co-Chair of Parliament’s Jazz Appreciation Group (APPJAG) since 1997, working on jazz development and promotion with PPL of the Parliamentary Jazz Awards, Jazz Services, Yamaha, promoters Serious and the UK’s Conservatoires. He was a Vice-President of the UK Jazz Collective, a patron of the Yamaha Music Education Initiative. During his 23 years as an MP Michael led the successful campaign with the Musician’s Union to extend copyright payments across the EU for recorded music to 70 years – from 50 years.

Jason McCartney MP, APPJAG Co-Chairman, said: “The Parliamentary Jazz Awards are a great way for MPs and Peers of all political parties to show their support for British jazz by recognising and honouring the amazing musical talent we have in our country. From established stars to fresh new talent, the range and diversity of this year’s winners shows the vibrancy and creativity of British jazz. We are extremely grateful once again to PPL for sponsoring the Parliamentary Jazz Awards.”

John Smith, Chairman, PPL, said: “We at PPL have been exceptionally proud and honoured to have been able to support and sponsor the special Parliamentary Jazz Awards since their inception in 2005.  I would like to extend my personal thanks and appreciation to Jason McCartney MP and to Lord Colwyn for doing such a fantastic job in co-chairing and running APPJAG as well as my thanks to Chris Hodgkins. These Jazz Awards remain a special night for Parliament, the jazz community and award recipients as well as for PPL and the music industry generally.”

Back by popular demand at this year’s ceremony were special guest performances by James Pearson and The Ronnie Scott’s All Stars.