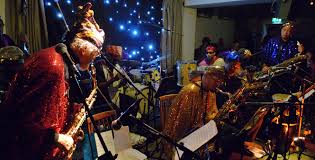 The Sun Ra Arkestra directed by Marshall Allen is appearing at the Belgrave in Leeds on Monday, 08 Aug 2016 at 8:00 PM

Sun Ra was an American jazz composer, bandleader, piano and synthesizer player, poet and philosopher known for his “cosmic philosophy,” prolific musical output, and performances. He was inducted into the Alabama Jazz Hall of Fame in 1979.

From the mid-1950s to his death, Sun Ra led “The Arkestra,” an ensemble with an ever-changing name and flexible lineup, although certain core members remained with the group through its various incarnations.

The current band is led by saxman Marshall Allen.  Their music ranges from keyboard solos to big bands of over 30 musicians and touches on virtually the entire history of jazz, from ragtime to swing music, from bebop to free jazz