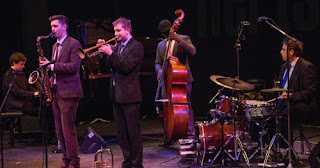 When a band opens with a powerful, musically thrilling performance, it’s fair to wonder how they’ll manage to sustain that edge-of-the-seat excitement over two sets. The Clark Tracey Quintet has its own answer: first-rate musicianship, combining individual skill and tight group cohesion; compelling tunes and shrewd programming; and a judicious blend of scorching, up-tempo numbers with ballads of exquisite tenderness. In short, this was an all-star band that played as a band.

Yet for all the power of the band as a whole, each of the musicians deserves special mention.  Many pianists have a technique and voice that is always audible, however adaptable they are. But Harry Bolt would have won notice in any of the countless musical styles he delivered—sometimes, within a single tune. He ranged from ferocious octave playing and sharp attack to moments when his sensitivity of touch and responsiveness were breathtaking.

The two front-line instrumentalists—Chris Maddock on alto and tenor; Henry Armburg Jennings on trumpet and flugelhorn—were exponents of the passion that can be expressed through those instruments, but they also had great articulation. Each had a ballad—Maddock on alto, re-investing ‘Sophsticated Lady’ with its languorous, sweet melancholy; and Armburg Jennings drawing on the darker hues of the flugelhorn for a heart-felt rendering of ‘Polka Dots and Moonbeams.’ And together, whether playing in unison or trading phrases, they were a force to be reckoned with.

As well as playing superbly throughout, bass player Daniel Casimir turned in some remarkable solo turns. These were not a ‘me, too’/‘my turn’ obligatory nod to a band member, but musical showcases in their own right. It’s not often in a bass solo that so much musical sensitivity and aplomb is invested in the phrasing of a note; and in the  slower and more spacious passages, with the band down to a hush, advanced technique and musical inventiveness  were combined perfectly. Audience members could be seen grinning and shaking their heads in pleasure and wonder.

And of course, leading and propelling the band was Clark Tracey, whose power on drums has its complement in attentiveness, finesse and spot-on musical judgment. His own solos were what everyone familiar with his musicianship has come to expect—and then some.

Smart and experienced bands know to keep the best material or the strongest performance for last; however, the best bands start strongly and just keep getting better. After the last, sensational number it was hard to imagine that they could play an encore to match, let alone surpass it. But this was the Clark Tracey Quintet.