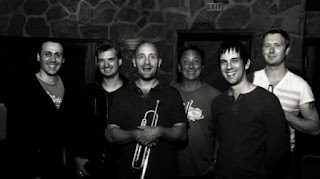 There can't be many two-trumpet sextets in existence, but on this showing, it's difficult to understand why. What could offer a brighter prospect than the brilliant, piercing qualities that only the trumpet can deliver--doubled--and configured in ways that are a treat for everyone with musical imagination, composers and listeners alike? Add a top-flight and musically compatible rhythm section, and just about anything is possible.

This was good time music, though not in any superficial, 'easy listening' sense. No one could mistake the quality of the melodic invention and interplay of the two leads (Martin Smith and Anthony Peers on trumpets), or the keen and playful work of the rhythm section, but this was a wondrously upbeat, accessible, swinging performance.  No one needed to strain in order to feel the gravitational pull of New Orleans, or echoes of the blues and swing. And in some of the trumpet-piano exchanges, there was also the legacy of ragtime. Yet, the tunes were largely originals. For these musicians, the tradition amounts to inspiration, not homage.

Then again, there were passages during the two sets that seemed to come straight out of classic Blue Note recordings of the 1950s and 60s, much abetted by Tony Ormesher's clean, rapid guitar lines. In fact, because the guitar can act as both a harmony and a melody instrument, the sound of the band was particularly full and rich. The numbers allowed plenty of space for Rob Stringer (piano), Hugo Harrison (bass) and Tilo Pirnbaum (drums) to solo, but these were substantial, well crafted numbers, so there was no extended soloing around the simple statement of a theme.

Perhaps inevitably, the trumpets stood out; and it was fascinating to hear how they configured their written lines and improvisations, but as the evening progressed, the full meaning of 'weave' became apparent: the interlacing of melodies and harmonies was conceived and performed with the entire band in mind. There were no abstract flights of fancy, no freak-out moments: for all that this was serious music, it never strayed from tuneful, playful and accessible. Even the number closest to New Orleans funeral procession music (begun most affectingly on muted trumpets) delivered us to something quite uplifting by the end. Any music that restores our sense of beauty is itself beautiful music. Thank you, Weave.