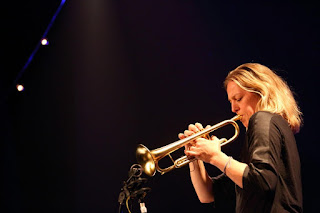 Canadian trumpter Ingrid Jensen is our first featured artist for the Norvoljazz network international touring scheme. She arrives into the UK on May 23rd.

We are delighted to feature Ingrid as the first featured artist as part of the The Orpheus Project. Ingrid Jensen will be joined by three stellar UK musicians – Jez Franks on guitar, Andy Champion on double bass and Tim Giles on drums. In addition to the quartet tour dates, Ingrid will also appear as a guest soloist with Colin Byrne’s Leeds Jazz Orchestra, lead masterclasses with the National Youth Jazz Orchestra and will close her time in the UK with a one-off performance at Ronnie Scott’s in London featuring the Engines Orchestra.

Ingrid Jensen is the perfect musician to be featured in the Orpheus Project’s inaugural tour. Described as one of the most gifted trumpeters of her generation, she is an exceptional voice in modern jazz. The quartet will perform in NORVOL clubs across the North and provide a unique opportunity to see this calibre of group in small, intimate venues. By partnering with NYJO and Engines Orchestra, we’ve built a tour which displays her broad talents, not only for small group performance but her work with large ensembles and as an educator, too.

Norvol Jazz/The Orpheus Project are grateful for the financial support provided by Arts Council England through their Grants for the Arts programme.

The next Norvol Jazz headline touring artist will be announced soon!