NorVol jazz meet up (and jam) at Ribble Valley 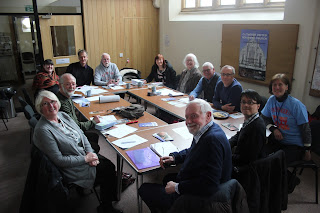 The NorVol Jazz committee met up at the Ribble Valley Jazz Festival in Clitheroe on 31 April 2016. It is such a friendly festival and we felt really well looked after by the festival committee and by members of Clitheroe United Reformed Church, who hosted us.

The meeting heard from Kim Macari about the Norvol Jazz’s first international tour featuring Canadian trumpeter Ingrid Jensen. Ingrid arrives into the UK on May 23rd and is touring many of the NorVol Jazz member clubs before moving on to Ronnie Scotts in London in June where she plays with Phil Meadows Engines Orchestra. The NorVol meeting unanimously thanked Kim for all her hard work in pulling the tour together and agreed to support a bid for a wider enhanced international touring scheme from 2017. The meeting also agreed to consult members about the possibility of NorVol Jazz applying to become a Regularly Funded Body under the Arts Council from 2017. The new “Great Jazz Festivals in the North” leaflet, produced by NorVol Jazz was circulated at the meeting to great acclaim. Seventeen Northern festivals are featured in the attractively designed leaflet. The NorVol Financial Report and the Club Roundup showed an organisation in a sound financial state and the membership in good heart with lots of examples of creativity and talent. One NorVol Jazz member Seven Jazz in Leeds had been nominated as UK jazz venue of the year in the 2016 Parliamentary jazz awards – another feather in the cap of a very healthy Northern Jazz scene.

NorVol Jazz members then led the Ribble Valley Festival Jam Session in the afternoon – Mike Gordon (Scarborough Jazz) on piano, Jazz at Heart/Orpheus trumpeter Kim Macari, Tom Sykes (Southport Melodic Jazz) on violin,Steve Crocker and Jean Watson (Seven Jazz) on bass and voice,  plus Steve Mullarky on drums. The jam session also featured one of the Festival stars clarinettist Arun Gosht who was really helpful and encouraging to people. It was hugely popular with many local people joining in and playing – the Festival asked if we would do it again in 2017!

The next meet up for the Northern promoters will be on Sat 24 September 2016 during the Scarborough jazz Festival - date for your diaries!