May and June gigs at Boston Spa 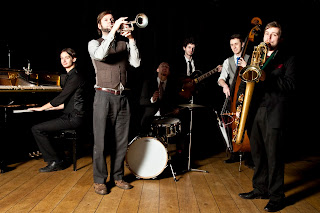 Something of a one off evening last Saturday with the Busquitos. The band spent almost as much time amongst the audience as on the stage - but good fun and something a little different! Thanks to those members of the audience who were targeted by the musicians and who responded in such a sporting fashion.

Apologies, too, for the lack of curtains in the Hall at present. We're obviously working on this - the curtains came down for the Hall redecoration but were found to be in poor condition and not worthy of being cleaned so we are in the process of replacement.

The programme to the end of the year is now on the website. No jazz next week or on 23rd of July and 12th December.

21st – Salute to Satchmo – recommended to us by Tom Kincaid, here’s a Dixieland band based in Cheshire making a first appearance. Led by trumpet/cornet player Darren Lloyd, the band specialises in the music of Louis’ Hot 5 and 7 period plus other stars of the 20s and 30s. Sounds like a refreshing new group to enhance our programme.

4th – Chicago Teddy Bears Society Jazz Band – here’s a wonderful way to get the month off to a flying start with a rip roaring session of traditional jazz from the “Teds”. Always a full bore performance laced with Merseyside humour - a sparkling performance with never a dull moment!

11th – Spirit of New Orleans – and to follow a highly regarded Yorkshire based band with a delightfully relaxed, distinctive style. Excellent musicians all and led by trumpet maestro Dave Pogson, this band swings and entertains in equal measure. To a degree, its name belies the wide variety of musical styles. Not to be missed.

18th – Big Easy Swing Band - making a first appearance is this energetic group of young musicians from Leeds playing an extensive repertoire from the early days in New Orleans through to Jump Jive. This band has quickly established a first class reputation throughout the North so we anticipate an enjoyable, foot tapping session.

25th – Hot Antic Jazz Band – recommended to us and on tour in the UK, this is one of the premier French jazz bands based in Nimes. Founded in 1979 with the objective to play for fun, the band has since played all the major European and UK and USA festivals and specialises in hot jazz sounds from the 1920s onwards. www.hotantic.net  £10.