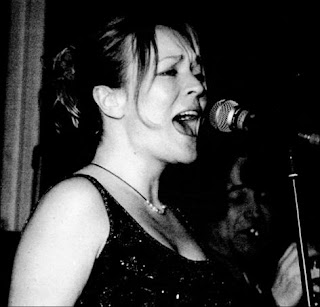 The audience could be forgiven for thinking that they knew what to expect; and as it happened, their eager anticipation wasn’t disappointed, but few could have expected such a range of styles and voices, all played with utter conviction. So it was that the band managed to find a coherent way of blending ‘Straight, No Chaser’ and ‘Sweet Georgia Brown’ into a single, rousing number; Liz Fletcher reached back decades into the catalogue of American songs and delivered them is a way that was comfortingly familiar, yet quite individual in their arrangement and delivery; and the moods and tempos ranged from the achingly poignant to roof-raising boisterousness.

Josh Kemp’s tenor playing eschews the ‘torrents of notes’ approach for well-crafted and clearly voiced lines, both in accompaniment and in his solos, with assured command of his instrument in every register. But he also delivers extended, fiery and fast-paced solos; and he has a particularly fine line in that fevered, rasping, bluesy quality so closely associated with the tenor saxophone.  His adroitness in shifting between styles and his ability to support Liz Fletcher’s vocals with nuanced playing were the marks of a truly gifted musician.

Bass player Pete Turner has a full, rounded sound; and there were moments when his playing seemed not only to anchor the music but to propel it. And by the time Dave Walsh was faced with the unenviable task of playing a drum solo on ‘Take 5’, we had already heard enough to relish the prospect.

If most of Liz Fletcher’s song choices were on the upbeat side—many of them allowing the band not only to stretch out but also to display its range—she saved something special for the penultimate number: a remarkable rendering of ‘Every time We Say Goodbye’, sustained through its opening half by Jamil Sheriff’s piano alone. Fitting though it might have been for a conclusion, the audience could hardly have departed on the quiet desperation of the lyric, so movingly performed.  So we ended on a party number—exhilarating music to round off a wonderfully exhilarating evening.