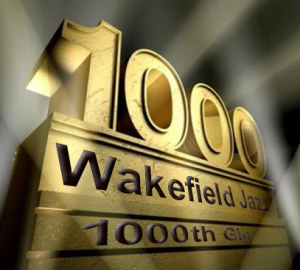 Friday the 15th April 2016 sees Wakefield Jazz hold their 1000th gig. Wakefield Jazz was founded in 1987 by Alec and Faith Sykes, who nurtured the club from its inception to national recognition. They created an audience and made friends with the musicians. Many of the very top UK and international jazz stars have performed at Wakefield including Jamie Culum, Clare Teal, Stan Tracey, Claire Martin, Ian Shaw, Snake Davis and Django Bates. Following Alec’s decision to “retire” from running the club after 17 years of hard labour, it was reconstituted to be run by a team of 10 volunteers, guided by the ever resourceful and enthusiastic Chris De Saram. Now almost three decades later they are putting on their 1000th terrific night of jazz.

Friday’s anniversary gig features the exciting contemporary jazz pianist John Law with his “New Congregation”. Described as one of the UK’s most imaginative and versatile pianists John brings three fantastic musicians with him on this Arts Council supported gig. The sumptuous playing of Josh Arcoleo on sax, bass mastery from the hands of Yuri Golubev and the intense work of Laurie Lowe on drums. This will be another jazz Friday night to remember, what more could you ask for to celebrate 1000 nights (except cake of course!)

Full details or to buy tickets online go to www.wakefieldjazz.org  or you can join the Wakefield Jazz group on Facebook and Twitter.