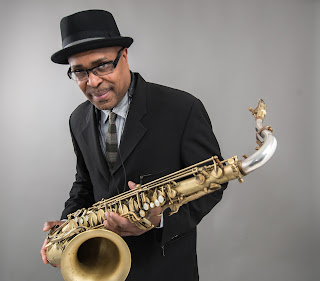 A lot to offer in Leeds this April with the Seven Jazz programme including Art Blakey saxman Jean Toussaint, Luxembourg pianist Michel Reis, rising Leeds tenor saxophonist Will Howard, and not one but two guitar legends - Jim Mullen and Howard Alden

Will Howard Quartet @Inkwell 1.30pm, Sun 10 April, £7/5 concessions
Will Howard sax, Joel Stedman guitar, Tom Riviere bass, Jordan Dinsdale drums.  Tenor saxman Will Howard is one of the most inventive young jazz musicians in the North. His quartet features a group of young talented Leeds musicians with their own contemporary take on standard tunes and Will's new compositions

Howard Alden @Seven Arts 1.30pm, Sun 24 April, £10/8 concessions
Howard Alden guitar, Darren Dutson-Bromley guitar Gary Jackson bass, Caroline Boaden drums
It seems that the only thing regarding Howard Alden on which the critics have debate is whether the remarkable jazz guitarist is one of the best or just simply the best!  He has been a Concord Jazz recording artist since the late ‘80s and has recorded with Woody Herman, Benny Carter, Flip Phillips, Bud Freeman, Kenny Davern, Clark Terry, Dizzy Gillespie and more.

Rush Hour Jazz @Seven Arts
Get out of the car and come an relax at Seven Arts - on the third Wednesday of each month 5.30-6.30pm. This month on Wed 20 April the guest is popular local jazz singer Ros Lewis, with Will Powell on guitar, Steve Crocker bass and Dom Moore on drums - payf collection

Join our Jazz Choir
Our Jazz Voices choir led by Tessa Smith, will start its summer term at Inkwell on Monday 11 April 7-9pm. We always do a gig at the end of each "term" - the one this summer will be rather special supporting John Etheridge and Vimala Rowe on Thursday 30 June @Seven Arts. Come along and give it a try! £25 for the series of six sessions, or £5 per session. You might even end up on the telly! Choir contact crockersteve@ntlworld.com.

A piano for Inkwell?
Weʼre raising money to purchase an acoustic piano for the fantastic Inkwell Arts Leeds so we can invite more jazz pianists to play there. We've had a great response - just a few days to go now! There are 88 piano keys - Seven Jazz would like you to sponsor a key (or several!) https://crowdfunding.justgiving.com/inkwell-piano

Tickets
Tickets for our concerts are available on the door, or in advance at any Seven Jazz gig, or online at our ticketsource booking site - https://www.ticketsource.co.uk/sevenjazzleeds

And yet more jazz! There are two jazz gigs being promoted at Seven Arts by others - Thursday 7 April 2016 John Law's New Congregation - 'These Skies In Which We Rust', an Arts Council funded jazz suite, and on 29 April the Big Easy play the music of  Louis Armstrong, Louis Prima, Nina Simone etc.