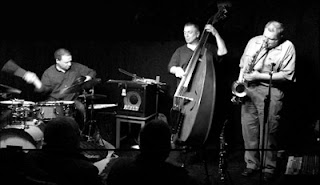 April is the busiest month of the year on the north east’s jazz scene. Two major festivals and International Jazz Day celebrations at the end of the month will test the stamina and financial well being of many jazz fans. Western swing, West Coast cool, Latin, strict New Orleans (Algiers), broadly Dixieland, Hot Club, contemporary American jazz, emerging British and big bands galore. There is so much going on during April there must be something for everyone. In addition there is no shortage of regular events and touring bands across the region. The festivals – Gateshead and Darlington – are four days and forty miles apart with something for everyone. Please see separate postings for news of these major festival events on Tyneside and in County Durham.

International Jazz Day – April 30 – has become an established fixture on the scene and a number of venues have recognised the value of branding a gig as such on the day. Three Tyneside promoters are on board - Sage Gateshead brings in the Scottish National Jazz Orchestra with American guest Bill Dobbins, piano (Professor of Jazz, Eastman School of Music, NYC) to play a Brubeck programme, Glasgow-Preston-Lowe gig at the Globe and the Jazz Café presents Graeme Wilson (reeds) and guitarist Mark Williams.

Canadian Woody Holler arrives in the north east with his orchestra to play Western swing in rural venues. The guitarist’s ensemble actually comprises a second guitarist, violinist and double bass player. Cotherstone Village Hall in County Durham is on the itinerary (April 8) as is the Cheviot Centre, Wooler, Northumberland (15) and Middleton and Todridge Village Hall near Morpeth (16). The Latin rhythms of Sonrisa will similarly be heard in rural venues, first in Weardale at Frosterley Village Hall (8), then at Haltwhistle’s Holy Cross Church in the north Pennines (15). The Black Bull in Frosterley (Apr 22) hosts the Vieux Carré Jazzmen during Frosterley’s annual Vintage Fun Weekend. Expect to encounter vintage trains, classic cars and motorcycles and a vintage jazz band. If you’re still not persuaded, there’s a beer festival too!

Brian Carrick’s Algiers Stompers play a rare north east date at Darlington New Orleans Jazz Club (Apr 2 lunchtime). County Durham-based Carrick, an Honorary Ambassador of New Orleans, tours non-stop home and abroad. A north east appearance by the strict N’Awlins clarinetist is one not to be missed. The enduring music of the Hot Club era can be heard in Durham, Blaydon and Newcastle during the month. A Durham Gala Theatre concert (Apr 5) for the busy Hot Club of Cowtown is followed by a debut gig for Emma Fisk’s new quartet at Blaydon Jazz Club (10). Emma Fisk’s Hot Club du Nord, to give the band its full name, features guitarists Dr James Birkett and Dave Harris and, on this Blaydon gig only, the depping Paul Baxter. Another Grappelli-inspired band - Swing 16 - makes its bow at the Newcastle Jazz Coop’s Globe pub base. Fiddler Kay Usher will be working with three guitarists (!) and a double bass player.

Trio Subtonic fly in from America to play a gig at the Jazz Café, Newcastle (Apr 8) and later in April Partikel stop off during their lengthy British tour (26) and the John Bailey Quintet will be there at the end of the month (Apr 29). Three of the area’s big bands are on home turf during April. The Darlington Big Band has a home town engagement (Apr 10) at St Augustine’s, Jason Isaacs Big Band returns to Hoochie Coochie, Newcastle on April 17and the Gala Theatre in Durham welcomes two bands, the first on Apr 24 when Chris Dean’s Syd Lawrence Orchestra calls in, and Paul Edis’ Gala Big Band appears on Apr 28.

Those looking for more can hear the Virtuoso Jazz Trio at St George’s Church, Morpeth at lunchtime on Apr 13. In marked contrast the freewheeling piano virtuoso Pat Thomas plays a gig for A Better Noise promotions at the Lit & Phil on the evening. Poles apart on the jazz spectrum, some will be in attendance at both performances.