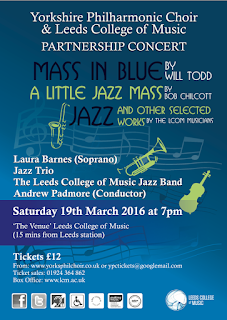 Yorkshire Philharmonic Choir present a Jazz and modern music programme which will feature the YPC performing the ever popular ‘Mass in Blue’ by Will Todd, accompanied by the LCoM Jazz Band and featuring the marvellous voice and stage presence of Laura Barnes (a former LCoM student and Margaret Markland Bursary winner, now making her own successful way as a soloist).

The programme also includes ‘A Little Jazz Mass’ by Bob Chilcott, accompanied by Jazz Trio.
The remainder of the programme will feature and the very best of the LCoM’s musicians, soloists, composers and combos in a variety of other items. 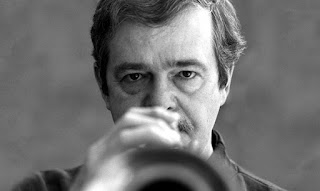 CJO pay tribute to the late Kenny Wheeler, who’s contribution to contemporary jazz will undoubtedly leave a lasting impression. This concert is going to draw from Kenny’s extensive catalogue of original music for large ensemble and feature his classics.

CJO will be led by Richard Iles, an associate of Kenny Wheeler, joined by legendary trumpet player Henry Lowther, who performed on the original Kenny Wheeler album ‘Music for Large and Small Ensembles’, and Jazzlines Fellow Lauren Kinsella as vocalist.