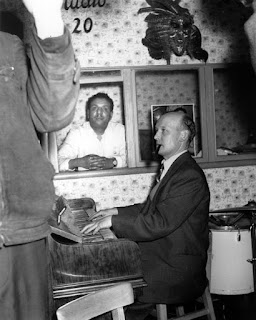 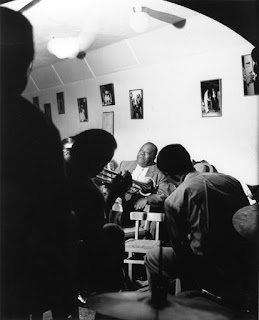 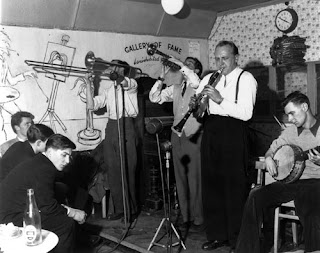 I've had a great response from the the post you published about Bob Barclay and the Studio 20 club in Leeds. Such amazing people - I've had photographs, stories, a one hour documentary, news paper and magazine articles. I've been tracing my ancestry for the last couple of years and here's where I've got to so far...

Bob Barclay, "the Yorkshire King of Jazz" who was the leader of the Yorkshire jazz band in the 1940-70 in Leeds. Most of the people who played with his band went on to create their own bands, some who played in the band are Bob Barclay (Tuba), Ray (Happy) Harker (Clarinet), Dickie Hawdon (Cornet) Ed O'Donnell (Trombone), Arthur Mann (Drums), Arthur Rigg (Piano), Edie Encell (Banjo). I have a list of 40 other members who played with them over the years I also have photographs and original recordings from first to last from 1948 to late 60s. My dad was a larger than life character who owned Studio 20 a Leeds jazz club that entertained nearly all the jazz players of the early days of jazz.

My aim is to publish this work in some form as its an amazing piece of social, cultural and musical history. Could people contact me with memories, photographs, stories and information of Studio 20, Bob Barclay and the Yorkshire Jazz B? Any guidance or advice would be great thanks.