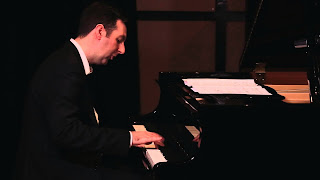 The Rob Barron Quartet features some of the UK’s finest jazz musicians: Rob Barron piano, Colin Oxley guitar, Tim Thornton bass and Josh Morrison drums. With regular appearances at the Ronnie Scott’s Late Late Show and at venues such as the 606 club, the band has developed a close musical rapport around a shared passion for music from the hard bop era.

Drawing influences from the classic groups of the period such as the Wes Montgomery and George Shearing Quartets and more modern groups such as the Peter Bernstein/Mike Ledonne Quartet, the band plays new exciting arrangements of timeless popular songs from Rodgers and Hart to Stevie Wonder as well as original compositions.

Rob studied Jazz at the Leeds College of Music where he won the Outstanding Performance award and went on to complete an MMus in jazz performance at the Guildhall School of Music.

The support band, the Dan Brunskill Quartet are students at Leeds College of Music, and we are delighted to be able to support these bands with this performance opportunity. Daniel is an impressive and accomplished young musician originally from Carlisle. His band include Dan on sax, Jordan Dinsdale drums, Andy Leggett  bass, Jack Hartigan guitar.