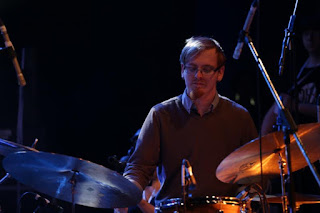 "Liverpooljazz which celebrated its tenth anniversary last year continues to waive the flag and raise the profile of live jazz performance on Merseyside. With the help of a legacy left to Liverpooljazz by one of its supporters, it has been able to sponsor a number of pieces of jazz related work recently.

We were approached by three local jazz bands who wanted to produce albums of their own compositions with them all being recorded at Parr Studios in Liverpool. We supported the production of albums by The Weave, Ginger Tunes Quartet and The Viktor Nordberg Trio. Each band aimed to have their albums completed in time for them to be launched at a special showcase concert, also sponsored by Liverpooljazz, at the Liverpool International Jazz Festival at the Capstone Theatre Liverpool. This free concert will be at 1pm on Sunday 28th February. Liverpooljazz is also sponsoring the concert by Courtney Pine and Zoe Rahman at the festival on Saturday at 27th at 7.30pm  More details are on www.thecapstonetheatre.com   We have been very keen to support Viktor Nordberg. He is so talented that even before he graduated he has been in demand to play with several local bands. We hear all too often of students graduating and then leaving the city to go and seek their fortune elsewhere. Viktor decided to find a partner and start a family and stay here in Liverpool.

Liverpooljazz is one of the sponsors of the forthcoming Threshold Festival of arts and music held each year at different premises centred around Liverpool's Baltic Triangle on the waterfront. We took a particular interest as Threshold will for the first time feature what they will call a festival jazz club with performances by jazz bands from the University of Chester and the Junior Royal Northern College of Music.

A group of media students at Edge Hill University in Ormskirk wanted to produce a television programme for their end of course work and came up with the idea of copying the style of the Jools Holland tv show with bands playing in front of a live audience in a night club setting. The only problem was they neither had the funds nor the knowledge of how to find the bands. They had the initiative to approach Liverpooljazz thinking that we were a band and wanted to know if we could perform for them free of charge. Victor and I were intrigued by this and paid them and their senior lecturer a visit.  We were so impressed with their approach, their professionalism and enthusiasm that we agreed not only to sponsor the programme and the hire of a grand piano, but we would book and pay for two local jazz bands and a singer.

It was fascinating watching the programme being filmed and edited and, needless to say, with a little encouragement and input from Victor and I,  plus music provided by The Weave, The Bobby Swing Band and vocalist Su Eyo, their production values doubled and this piece of end of term work contributed to all the students graduating with flying colours. Hopefully having the programme in their portfolios will go some way to help them find jobs in a very competitive industry.
We continue to produce our monthly two hour online radio programme in which we chat about jazz, play the standards, preview and review concerts and interview members of the local jazz community. Listen to this programme around the clock on demand at www.spreaker.com/user/liverpooljazz.
We are currently investigating having our eight year old website overhauled which continues to provide a meeting point and information service for the local jazz community and its visitors and supporters.

Liverpooljazz continues to sponsor the work of the 'In Harmony' Project at the Liverpool Philharmonic Society which offers music lessons to school children in underprivileged areas of the city. Similarly the work of Rare Studios provides and subsidises tuition in performing arts for young people with Liverpooljazz being one of its supporters.

We are sponsoring a concert by local jazz and classical guitarist Neil Campbell and his vocalist partner Perry Alleyne-Hughes on Valentines Day February 14th at the Grade1 listed Synagogue in Princes Road Liverpool in aid of its building restoration appeal. For tickets at £12 contact the office on 0151 709 3431.