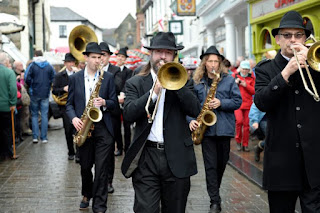 From the Workington Times and Star: "Keswick Jazz festival's future hangs in the balance"

After 25 years, this May's Keswick Jazz Festival might be its last. The town's Theatre by the Lake announced today that it will not be in a position to manage the festival in its present format from 2017. Falling ticket sales and public funding cuts are among the reasons the theatre said it could not carry on. It wants a promoter or event manager to take it on. Theatre bosses said the venue would be available for performances from 2017 onwards but a new arrangement would have to be put in place. This year's festival, from May 12 to 16, will go ahead as planned.

Patric Gilchrist, Theatre by the Lake’s executive director, said: "We regret that we are no longer able to bear the responsibility for the festival. "The present arrangement is unsustainable for the theatre and there has to be change if the festival is to survive.

"We hope to find an experienced and enthusiastic promoter who can devise a credible business plan to take the festival forward and ensure its financial stability by our deadline of May 9.

"If no credible offers are received by that date then 2016’s festival will be the last in its current form."

The theatre said even if a full-scale festival did not go ahead, it would commit to a week of jazz in May 2017.

A spokesman added that other factors in the theatre's decision were a shortage of affordable and flexible accommodation for artists, the complexity of managing multiple temporary venues and demands on the time of Theatre by the Lake staff. The number of tickets sold has fallen steadily since 2011, leading to significant loss of income for the festival.  Keswick Jazz Festival's only regular financial support has been from Jennings Brewery.  It said without the Cockermouth firm, the festival would have become unsustainable several years ago.

Mr Gilchrist added: “The festival makes very heavy demands on Theatre by the Lake staff in almost all departments.

"At a time when the theatre is having to adapt to public funding cuts, with the prospect of further cuts to come, we cannot continue to support the festival in the way that we have since the theatre opened in 1999."