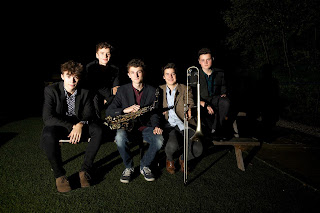 "Our festival is almost on us-astounding how the time whizzes by when you are eyes down on a scheduling job. Pleased to report tickets selling well. Almost double the number of individual concert tickets compared to last year with  take-up has been even across the 11 concerts so there are still tickets available for all of them here. http://www.jazzinsouthport.co.uk/festival/jazz-on-a-winters-weekend-2016/

The main point of this blog however is to let you know about our February Southport Melodic Jazz gig. We chose to promote this year’s and last year’s “Jazz North Introduces” winners in consecutive months during our quiet period-Jan “Artephis” (we had 30 people turn up-fantastic gig). So on Sunday Feb 21st 8 pm we have “Jam Experiment” Ex Chethams - Rory Ingham/Alexander Bone/Toby Comeau/ Jonathan Mansfield -  new bass player Joe Lee. Barnsey says they are the best young band he’s ever heard and Iain Dixon (their mentor) says he couldn’t teach them any more stuff!

I’ve heard them 3 times now [Wakefield, our festival last year and Scarborough] and I must say they a bit special. Hoping for a good turnout at The Royal Clifton Southport!"