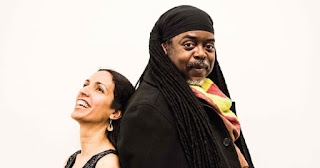 Here are our jazz shows for Spring/Summer - hope all well with you....

4 May Courtney Pine and Zoe Rahman Necessity is often the mother of reinvention when it comes to sustaining a career; Courtney Pine’s latest project sees him abandoning his funky, feelgood soprano-sax-and-soca band of recent years in favour of the intimacy of a duo setting and the challenge of the bass clarinet. There’s a small but respectable body of bass clarinet work in jazz, tending mostly towards the avante-garde, usually as a ‘double’ alongside the player’s main instrument; Pine’s forthcoming record features him exclusively on the freakishly elongated horn, accompanied by longtime collaborator Zoe Rahman.


14-May Cory Henry, The Revival Project. As well as being a member of Grammy Award-winning collective Snarky Puppy, Cory is an in-demand, multi-instrumentalist and producer, long-term member of Snarky Puppy and an artist who has worked with innumerable high-profile musicians such as Kenny Garrett, Bruce Springsteen, Robert Glasper and The Roots. "The Revival", his latest release and touring project, showcases Henry on solo Hammond B3 organ showing his musical roots in gospel, jazz and soul.

28-May Hugh Masekela and Larry Willis A rare chance to see the two jazz innovators reunite, combining Masekela’s exuberant horns with Willis’s elegant pianos solos. Larry Willis and Hugh Masekela met whilst studying at Manhattan School of Music in the 1960s. The artistic freedom they experienced in New York, inspired their music making and their activism as Masekela became a leading figure in the fight against apartheid in his home country. Masekela’s music has a distinctly African, more relaxed feel, whether on his political pop or experimental jazz; Willis’s is ambitious, frantic free jazz, inextricably linked to New York.