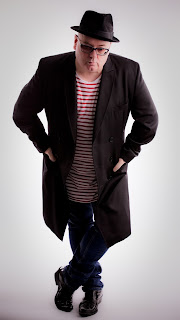 Many jazz singers are known for an instantly recognisable tone. Billie Holiday or Louis Armstrong are known the moment they open their mouth, for a particular quality of delivery. Jazz singer and comedian Ian Shaw, who appears at Seven Jazz Club in Leeds on Thursday works differently. His best performances are about the blend of comedian’s timing and musician’s tone - tears and giggles a plenty.

Ian leading a bit of a double life these days - by day performing at venues like Ronnie Scott's in London, releasing an well received new album ("Theory of Joy") and the rest in the mud and squalor of the jungle - the unofficial refugee camp in Calais for 7000 refugees in France

For the past few months he has been visiting regularly, initially because he was outraged by the conditions in the camp he saw on television. Once out there – having taken out much-needed clothes and sleeping bags – he discovered there were decent players among the refugees who had lost their instruments along the very tough way. So later he loaded his car and took over drums, guitars and basses (including one that once belonged to Jack Bruce of Cream, donated by Jack’s family). But he now also helps build, fund, organise and raise awareness of what is going on just a few miles from the Kent coast. 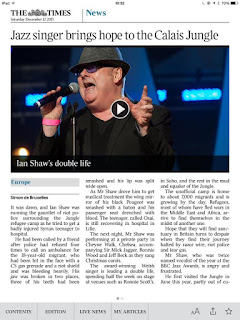 Ian is keen that people know about life in The Jungle, to share the story of the people he has met and the sometimes terrible things that have happened and are happening . He is also keen to refute what he calls the “vile lies” about the camp, such as the inhabitants having so many clothes from charities, they burn them for fuel. In fact, charities are very thin on the ground – there isn’t a large UK one active in The Jungle at all. Just an ad hoc group of musicians (as well as a larger contingent of non-musicians) who aren’t doing it for the cameras or some high-profile telly marathon". Here's his video of a singel he recorded to raise money for the work in the Jungle - https://www.youtube.com/watch?v=tKQfrSrfEDU

Ian is singing at Seven Jazz Leeds at the Seven Arts venue this Thursday 18th April - he's there with pianist Barry Green  singing some songs from the famous Jewish Jazz composers - Stephen Sondheim, George Gershwin in a programme entitled "Tower of Song" after the legendary composition by Leonard Cohen. There will be a collection  at the gig for his work as Ian heads back afterwards to the Jungle.

Hear Ian at Ronnie Scott's https://www.youtube.com/watch?v=0iSY-w0-haA
Tickets for the concert are here https://www.ticketsource.co.uk/date/FEMHHD