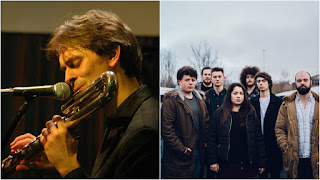 First the first time ever the B-Side at LCoM has moved to Sela Bar featuring the incredible flautist Gareth Lockrane and LCoM's own 'allcaps'.

Gareth Lockrane:
Gareth Lockrane started playing at the age of 10 and after raiding his dad's record collection discovered jazz at 14. Early influences included Cannonball Adderley, Miles Davis, John Coltrane, Charlie Parker, Bill Evans and Stan Getz on the jazz side whilst also being transfixed by the great blues-rock guitarists of the 60s and 70s as a child - Jimi Hendrix, Albert King, Albert Collins, Freddie King, Eric Clapton and Buddy Guy continue to be major influences. On flute the initial main inspirations were saxophone "doublers" like Frank Wess, James Clay, Roland Kirk, Bobby Jaspar and James Moody and later on he fell under the spell of flute visionaries like Jeremy Steig, Eric Dolphy, Hubert Laws, Paul Horn, Eddie Parker and James Newton amongst many others.

In 1994 he enrolled on the jazz course at the Royal Academy of Music in London where teachers included Stan Sulzmann, Hugh Fraser, Mark Lockheart and Eddie Parker and where he struck up musical relationships with fellow students the Fishwick brothers, Osian Roberts, Orlando le Fleming and many others.

allcaps:
allcaps is a new and upcoming band, performing music of hip-hop, jazz and neo soul, there is something to fit everyones taste. They're incredibly excited to get their material out and gigging, bringing a new sound into jazz. Fronted by trombonist and band leader Patrick Martin, they will play their own arrangements of Takuya Kuroda, Janek Gwizdala and will be debuting new material off their forthcoming EP 'Midnight Calls' featuring Helena Debono on vocals.

Free to get in!