Eyeshutight gets the Wakefield jazz vote.. 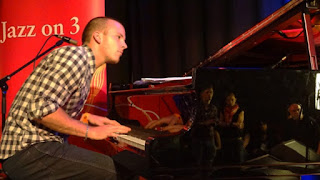 This was thrilling and captivating music. Everyone in the audience could easily have agreed that this was a ‘power trio’—an apt descriptor in this case, but hardly a phrase that routinely attaches to an unamplified piano trio. And powerful it was, but in the most unexpected ways: not because the music was played at high volumes or furious speeds, or because the notes were packed together densely; instead, it was spaciousness, clarity, precision and near-telepathic interplay that characterized the entire performance. Of course they also had a good line in crescendos and certainly weren’t bashful about cranking up the volume, but those techniques and others were always deployed in the service of musical ideas and not merely to show what they could do. This was powerful musical expressiveness without ego or empty display, together with
a wealth of ideas.

The opening number lasted half an hour—and it was mesmerizing. It seemed that even the band was a little surprised by how long they had played, but as one theme melted into the next and as the rhythmic patterns shifted seamlessly, we all found ourselves ‘altogether elsewhere.’ Of particular note is that there were few solos of a conventional sort, even though each of the instrumentalists had stand-out moments: throughout, the emphasis was on the sound of the trio; and given the rhythmic complexities, perhaps it could hardly have been otherwise.

Because the music was so seamlessly coherent, it is difficult to pick highlights, but toward the end of the first set, pianist Johnny Tomlinson played a beautifully sonorous, hymn-like theme, around which his harmonic invention was a marvel. We also had funk drumming, extended technique on all three instruments, passages of melodic beauty, pinpoint turns and exciting, propulsive drive, carried in the most surprising range of styles, from rollicking, country-tinged tunes to high abstraction.  The encore was a brief, sweet melody, played with exquisite delicacy—as fine an ending as it was surprising.

The applause was thunderous—and richly deserved"