Questions Questions? Find the answers at the Globe! 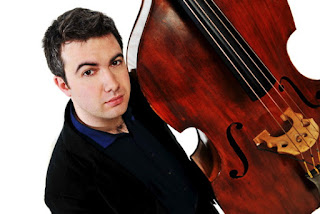 Is it possible to have too much love? The Globe in Newcastle recommend you come down on Saturday 12 December and find out. That's the last gig of the UK tour of Euan Burton & Occurences promoting their new album 'Too Much Love'.

Bassist Euan Burton is one of the most lyrical and creative composers of the Scottish jazz scene. On his recent album "Too Much Love" Burton deepens his penchant for developing thematic material that runs the course of the album, while artfully balancing composition with improvisation.

Euan’s collaborators play a central part in the music and the quartet contains three of his long-time associates. Featured on piano is Tom Gibbs, one of Burton’s oldest collaborators, Alyn Cosker (drums) a powerhouse of the Scottish music scene who’s virtuosic talents come from years of experience with jazz artists such as Tommy Smith, Lee Konitz and Joe Locke and Adam Jackson (sax) a rising star of the local music scene.

Another question from the Globe - 'is Scottish jazz distinctive?' They think it is. This season they will have hosted quartets from rising starts of the London and Glasgow jazz scenes so they should know. The Samuel Eagles Quartet (from London) impressed Newcastle audiences in November, and they are sure that Euan Burton & Occurences will be equally impressive on 12 December.

Doors open 8pm, Admission £10 on the door or buy tickets in advance from http://skdl.it/1VhouDU

Before that on Saturday 5 December we host the debut gig of the Milne & Johnston Quintet, a new project featuring vocalist Debra Milne and Bradley Johnston on guitar.

On Thursday 3 December we are again holding events in two venues: Folk Meets Jazz at the Globe in Newcastle and Alice Grace Quartet at Empty Shop in Durham.