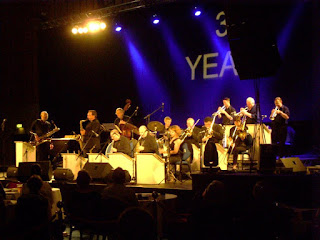 Fantastic news from Ian Darrington at Wigan. The Wigan International Jazz Festival whose future was in serious doubt WILL be continuing!

While the attention of the London jazz press has all been about the collapse of the Brecon jazz festival, in the North we have a rather different (and happier) tale to tell. The Wigan International Jazz Festival is a four-day celebration of classic jazz, big bands and jazz orchestras and features national and international artists. The Festival, which takes place in July each year had it's 30th anniversary in 2015 but there was doubt about the festival organisation continuing. Wigan Jazz Club has stepped into the breach - there will now be a change in the management team with Wigan Jazz Club taking over the role. Festival Director Ian Darrington MBE has started attracting acts for 2016 from international artists and from the vibrant and global youth jazz movement.

Ian has been asking for suggestions and says

"Following my posting last evening re Wigan Jazz Festival I wanted to say a sincere thanks for all the replies…an amazing response. I started to reply to the suggestions as they came in but I just couldn't keep up to them and so decided to send one reply of thanks to you all.

There have been some excellent suggestions and I will consider all of them. At the end of the day we have four evening and six afternoon slots to fill and a minimum of two thousand tickets to sell…the challenge begin!"