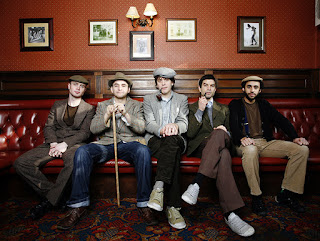 "A major coup for Jazz North East is a one off exclusive British date for the Joe Morris Quartet. The leftfield American guitarist flies in to Newcastle with Mat Maneri (viola), Chris Lightcap (double bass) and drummer Gerald Cleaver to play the Bridge Hotel on Sunday 6 December. One week later (13) at the same venue the promoter presents two bands with northern roots: Shiver (Chris Sharkey and Andy Champion from Gateshead and Joost Hendrickx) and the trio of D’Silva, Pope and Alderson (saxophonist D’Silva from Yorkshire, the latter two a bass and drums pairing from Tyneside). Adam Fairhall and Markov Chain form another double bill at the Lit and Phil (Dec 3) and Led Bib are guests of Jazz North East’s original composition Schmazz night in the upstairs room at the Jazz Café (Dec 16).

The big band scene is remarkably buoyant in the region. December offers seventeen big band sessions (all of them top class) in a variety of venues – pubs, clubs, hotels, concert halls, church halls and arts centres. The pick of the pub sessions is a Christmas party gig organised by Musicians Unlimited, resident Sundays at the Park Inn in Hartlepool, with Bruce Adams (trumpet/flugelhorn) their guest (Dec 13). The Durham Alumni Big Band plays the music of Matt Roberts at St Augustine’s, Darlington, also Dec 13. Sellouts are nothing new to Jools Holland (Newcastle City Hall, Dec 2 & 3), but let’s hear it for the Strictly Smokin’ Big Band playing two sell-out nights (Dec 18 & 19) at the Black Swan,  Newcastle, then aiming to do likewise at Hoochie Coochie on Dec 29 (no mean feat post Christmas) and again on New Year’s Eve at the Vermont Hotel. That’s four sellouts over thirteen days at three Newcastle venues – testament to the band’s deserved popularity.

Durham’s Empty Shop on Framwellgate Bridge continues to present a jazz programme. The success of the venture has seen the monthly session become a fortnightly gig. Alice Grace – a fabulous new voice on the scene – sings there on Dec 3 and Dec 17 sees Mick Shoulder’s Swing Manouche in town. Bassist Shoulder plays guitar in this band with the redoubtable Neil Harland taking on double bass duties and the surprise package is pianist Paul Edis playing clarinet! Final year degree student Bradley Johnston has an important appointment at Sage Gateshead on Dec 8. Guitarist Johnston will give his BMus student assessment performance in front of examiners and a public audience. Working with his now regular quartet, BJ will pass with flying colours – you read it hear first! By way of preparation, Johnston has two gigs in one day on Saturday 5. The first, at two o’clock in the afternoon, follows a NorVol meeting at the Jazz Café, Newcastle. Admission is free and all are welcome. Later, at eight o’clock, Johnston will be at the Jazz Co-op’s Globe headquarters with a new four piece. The Milne-Johnston Quartet features Johnston with co-leader, vocalist Debra Milne, bassist Paul Grainger and recent graduate Lewis Watson (drums).

Later in the month (Dec 12) at the Globe, bassist Euan Burton brings in his Occurrences band. With Tom Gibbs (piano) and drummer Alyn Cosker in the line-up expect nothing less than a cracking gig. The Jazz Co-op’s diverse programming policy both celebrates and eschews the forthcoming festivities: days before Christmas (20) Damian Cook leads members of the Theatre Royal’s pit orchestra in a jazz jam session. Expect some serious jazz from the Dick Whittington conscripts on their day off. At noon, Dec 27, Escape from Xmas Jam, led by Stu Finden, should guarantee a bah humbug full house!

Pick of the Jazz Café’s gigs could be a reprise of a memorable duo gig earlier in the year when Paul Edis and Graeme Wilson meet up once again (Dec 11). This will be a second gig of the day for the pair following the Graeme Wilson Quartet’s lunchtime concert at the nearby Lit & Phil. Such is the quality of performances at the Jazz Café it could fall to Matt Anderson (tenor) and guitarist Aubin Vanns (Dec 18) to upstage them. So good are Matt and Aubin they could well do just that".