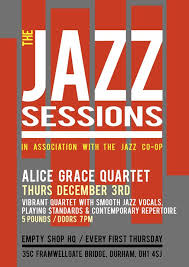 Alice Grace is a young British jazz singer who’s career began touring with established UK jazz big band The National Youth Jazz Orchestra (NYJO) and singing with the James Pearson Trio at the famous Ronnie Scott’s Jazz Club, before landing a place to continue her musical education at the London Guildhall School of Music and Drama and the Conservatorium van Amsterdam.
After graduating she sang with a variety of jazz and soul ensembles performing at prestigious venues such as The Southbank Centre, The Natural History Museum and the Royal Albert Hall in London, as well as more intimate jazz venues across the UK and Europe.

Following a time in London, Alice headed over to the Middle East and embarked on a two year stint in the UAE. Co-founding successful band The Swing Revue, Alice performed for the Ministry of Foreign Affairs (MOFA), Lanvin, Moet & Chandon, Dubai Film Festival and the Dubai World Cup, as well as featuring regularly at well-known venues such as Jazz Pizza Express, Pacha Ibiza and The Atlantis.

Since relocating back to the UK, Alice has found a home in Newcastle-upon-Tyne. With a new jazz quartet, she is blending into the North East jazz scene, performing music from her early years combined with a more contemporary selection. Alice’s experiences have heavily influenced her live performance, turning an academic jazz musician into a respected and international artist.
2016 will see Alice recording a debut jazz EP with the new quartet and featuring on the UK Jazz Festival scene.