A view from Leeds... 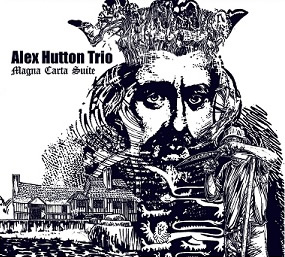 Just three to choose so I've chosen my favourite recording by Sheffield pianist Alex Hutton released during 2015 - the folky and lyrical "Magna Carta Suite" with  Yuri Goloubev –double bass and Asaf Sirkis – drums. I had the opportunity to play the score with Alex in Sheffield in October - it is just beautiful.

I'm not sure you can say that saying farewell to old colleagues would be a highlight, but certainly the city's jazz community did themselves proud in celebrating the lives of two Leeds Jazz promoters who passed on in 2015 - Dave Hatfield in January and Barry Cooper in December

And the third would have to be the celebration of 50 years of Jazz Education at Leeds College of Music with the Alumni Big band directed by Nicki Iles on 11th October 2015 at Leeds Venue. Anniversaries are a good time to look back, to ask people to think what has been important and consider what the future might bring and Leeds College of Music's 50th anniversary celebration was just that. This was not only an anniversary for the College, but also for jazz education itself – Leeds was the first full time college jazz course in Europe, established in 1965. Jazz education is now so widespread and commonplace throughout the music curriculum that it is difficult to understand just what a big change that was at the time. It was great therefore that one of the people behind the original course at Leeds, 87-year old (and still going strong) jazz bass legend Peter Ind had travelled up from London with his wife Sue .

I've not even mentioned the successful award by the Arts Council for a NorVol International Touring Programme, nor  any of the bands that have played at our own club Seven Jazz - and we've had some beauts such as Tom Green's Septet, Trish Clowes with Gwilym Simcock and Mike Walker,  Marius Neset Quintet,  Darius Brubeck Quartet, James Hamilton's Jazz Orchestra “Covers Suite” (with all the stand out vocalists of the Leeds popular music scene) Elliot Galvin's Trio, Bad Ass Brass, Maciek Pysz Trio, Andy Sheppard Quartet, Alan Barnes Christmas Carol Octet and the ever entertaining Tom Sharp Jazz Orchestra. I could go on  - but I won't as I've already broken my own rules!!!