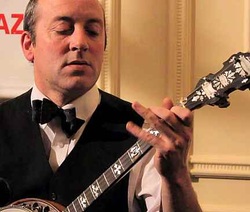 Please find attached the programme to the end of the year. One or two rather special evenings coming up in November which we know you'll really enjoy.

We've had some first class evenings in the past month - the John Hallam/Jamie Brownfield session was especially well received and we have invited them back next year; also an excellent session of New Orleans music last Saturday with our old friend Brian Carrick.

The Rugby World Cup and probably other seasonal factors have caused our attendances to fluctuate rather more than usual at this time of the year, so we are now hoping with New Zealand having carried off the honours that numbers attending will return to normal.

A word about the new Café Bar in the Village. Stew and Oyster has opened for business opposite the Costcutter and adjacent to the Village car park. Very reasonably priced tasty meals served before "Jazz time" as you can see from the Menu. Link below. The only problem may be that you can't book - you just turn up. Lots of favourable comments already.  http://stewandoyster.com/locations/boston-spa/

Looking forward to seeing you all in November and December"

November 2015
7th – Maine Street Jazzmen – first class traditional jazz played with verve and enthusiasm by this well respected band from the North East. The added bonus is always the addition of several R & B numbers on the harmonica from leader and trombonist, Herbie Hudson.
14th – Swing Commanders – a much anticipated appearance by this multi – instrumentalist and versatile group performing an exciting mix of 1940’s classics, boogie woogie, swing, jump jive and more. Energetic showmanship coupled with sophisticated vocal blend. £10
21st – Merseysippi Jazz Band – founded in 1948 and still going strong. One of, if not the “legend” jazz band from the North of England ever since. Until recently, a two trumpet front line in the style of the famous Lou Watters’ Yerba Buena band re-creating the music of King Oliver and Louis. Happy sounds to keep your feet tapping.
28th – Hot Fingers with Emily Campbell – a truly class act led by our number one guitar/banjo player “Spats” Langham. The hot jazz sounds of the 20s and 30s played acoustically and interspersed by wonderfully evocative vocals from Emily. Not to be missed. £10

December 2015
5th – Café Society – a long overdue return by this “off the wall” cabaret quartet featuring the outrageous Anthony Mason in his “Noel Coward” role with banjo and ukulele plus the undoubted talents of Willie Entwistle of Temperance Seven fame on reeds, Andy Henderson on cornet and Colin Turner on tuba.
12th – Sorry – No Jazz
19th – Christmas Party Night with the Harlem Hot Stompers – the last opportunity to clap your hands and stomp your feet in 2015. Yes – it’s Christmas Party time again with its traditional festive atmosphere, nibbles, mince pies, shortbread and the special raffle. And the whole fun filled celebration driven along at a cracking pace by the energetic Stompers. £10