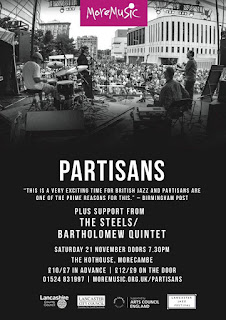 Since their formation in 1996, Partisans have been thrilling audiences with their ferociously energetic performances and is co-led by two pre-eminent musicians of their generation, Phil Robson (guitar) and Julian Siegel (sax, clarinet). The quartet's line-up is completed by Thaddeus Kelly (bass) and Gene Calderazzo (drums). The lyrical and melodic compositions written by the leaders provide the framework and starting point, underpinned by the rock solid, freewheeling and supercharged rhythm section. Partisans are a real band, with a cult following in their native UK, years of performances around the globe & are hailed as having broken the ground for the new wave of British jazz! They released their 5th critically acclaimed album, 'Swamp', in the summer of 2014 on Whirlwind Records, toured North America in June ’14 & more recently appeared at the EFG London Jazz festival, Tampere Jazz

- Partisans were the highlight of the Cheltenham Jazz Festival, jazz that makes you blink in its glare'- John Fordham,The Guardian
- “Restless, almost reckless energy… delirious listening… consistently thrilling.” BBC Music Magazine
- 'One of the most exciting all star experimental groups in Jazz today' BBC Radio Jazzon3

Support from The Jake Steels/Bartholomew Quintet