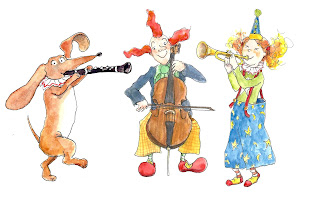 Teenage musicians from across Yorkshire will be given the chance to perform on their own stage at this year’s Marsden Jazz Festival.

The Bandstand in the Park will feature over ten hours of live music by youth groups on Saturday 10 and Sunday 11 October, including Kirklees Youth Jazz Orchestra, Heckmondwike Grammar School Soul Band and Greenhead College Big Band.

Younger children will also have the chance to enjoy their own jazz gigs with two performances taking place just for them at Standedge Tunnel Visitor Centre on Sunday 11 October.

Manchester-based theatre company Artful Playground will be bringing Lolly Pops and Circus Props and The Toothy Adventure of Davy Denture to Marsden to entertain children aged between three and seven.

The children will be invited to become the characters, sing songs and play games with the storyteller. Professional musicians will also represent the characters on different instruments.

“The youth groups we have at the Marsden Jazz Festival have always helped to create a fantastic atmosphere during the weekend, and it’s great to see them playing alongside more established artists.

“That’s why we decided to increase their profile at this year’s festival by giving them their own stage, with over ten hours of live youth music taking place at the Bandstand in the Park.

“We also hope the festival will introduce some younger children to jazz for the first time, which is why we’ve invited Artful Playground to perform two gigs at Standedge Tunnel Visitors’ Centre.

“The shows are aimed at three to seven year olds so they’ll be really fun and interactive and there’ll also be the chance to hear some great live music performed by brilliant musicians.”

Heckmondwike Grammar School Soul Band, Honley High School Jazz Groups and Blackley Activity Stage Band will be appearing in the bandstand on Sunday 11 October, and the Manchester University and Wakefield Youth jazz orchestras will be at the Marquee on the Bridge on Saturday 10 October.

The youth group gigs are free to attend, with all donations being used the support the festival’s future.

Lolly Pops and Circus Props is taking place at 11.30am at Standedge Tunnel Visitors’ Centre on Sunday 11 October, and The Toothy Adventure of Davy Denture is on at 1.30pm at the same venue on the same day.

Tickets are £5 for both children and adults, and are available to buy at www.marsdenjazzfestival.com/tickets.