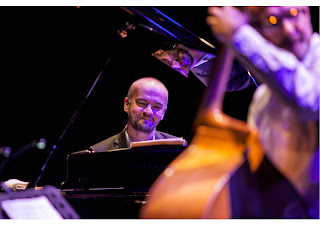 The Millennium Hall season begins with a bang on Friday 2nd October with European stars Kit Downes, accompanied by Petter Eldh on bass and James Maddren on drums. Based in London and Berlin, these three have toured the world to great acclaim, but here they shine collectively as experimentalists and improvisers.

They’re followed the week after at Millennium Hall on Friday 9th October by Liam Noble in a rare opportunity to see him playing solo and featuring his new solo recording, which reflects his amazingly eclectic approach.
Expect Zawinul, Rodgers & Hammerstein, Miles and Elgar !

We then move on Saturday 17th October to the Crucible Studio, with Jean Toussaint’s Blakey Project, featuring Jean Toussaint on saxes, Byron Wallen on trumpet, Dennis Rollins on trombone and Julian Joseph on piano. The project commemorates Art Blakey’s  massive contribution to modern jazz, exploring his music and the amazing players that emerged from the Messengers over 40 years.