Marsden festival the biggest yet 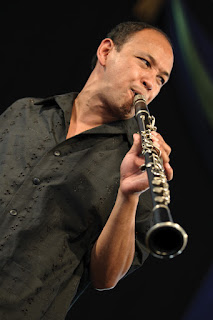 Marsden's Jazz Festival 2015 will be the biggest yet with almost 100 gigs taking place at 26 venues this October 9-11.

Internationally-acclaimed saxophonist Jean Toussaint will lead the headliners at the festival between Friday 9 and Sunday 11 October, which also includes over 70 free events, made possible by contributions from local businesses and community organisations and by funding from Arts Council England and Kirklees Council.

The Saturday parade will once again be the centrepiece of the festival, with visitors being encouraged to make their own kazoo horns and join in. The parade will be led by Cumbrian street band BLAST Furness and a moving scrap metal sculpture, the Hurly Burly, which wowed visitors at last year’s festival will be bringing his sister, the Beast, along this year. The Hurly Burly and the Beast – a pesky dragon who can’t resist playing with the audience – have both been made by local sculptor Dave Young.

Most of the headline gigs will once again be taking place at the 19th century Mechanics Hall, including a performance by Caribbean-born musician Jean Toussaint on Sunday 11 October.

Other venues include three outdoor stages – the Marquee on the Bridge, the Marquee outside the Mechanics and the Bandstand in the Park, 13 pubs, clubs and bars, two cafes and one former cowshed.

“We've got a really exciting line-up for this year’s festival and, once again, we've been able to make the vast majority of gigs free to attend, thanks to the generosity of local businesses and community organisations and funding from Arts Council England and Kirklees Council.

“The giant Hurly Burly sculpture went down really well at last year’s parade so we’ll be bringing him back for a second year, along with his sister, the Beast. It’s definitely one not to miss.

“Festival goers will also be able to wander around our 26 venues ranging from the 19th century Mechanics Hall to intimate pubs, clubs and cafes. We’ll also have live music in the street, the park and on a bridge over the River Colne.

“There’s always a great family atmosphere during the festival weekend and you’ll hear the sound of jazz ringing through the streets, whether you arrive by car, bus, train or even boat.”

Other headline acts at this year’s festival include New Orleans-based clarinettist Evan Christopher on Friday 9 October, and ‘Jazz Instrumentalist of the Year’ Arun Ghosh on Saturday 10 October

Multi award-winning vocalist Claire Martin OBE and legendary saxophonist and vocalist Ray Gelato will also be combining their love of all things swing in a Saturday evening performance.

Marsden’s New Stream programme of cutting edge music will feature four bands this year, with festival fans being able to take advantage of a ‘four for three’ ticket offer and see all four New Stream performances for £21. Apes Grapes, Metamorphic, the Geordie Approach and Lauren Kinsella, nominee for Vocalist of the Year in Jazz FM’s 2015 Awards, will all be performing at the Royal British Legion on Saturday 10 October.

The Marsden Jazz Festival is now entering its 24th year and has become a mainstay of the festival calendar in the UK, with performances by Simon Fell and Let Spin recorded at last year’s event featuring on BBC Radio 3’s ‘Jazz on 3’ programme.

Thousands of people attend the annual three-day festival in the small Pennine village of Marsden every year. The 2015 Marsden Jazz Festival will be held between 9 and 11 October. More details are available at www.marsdenjazzfestival.com.