Jazz at The Capstone Theatre Liverpool 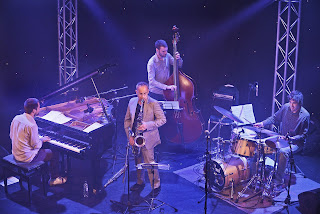 Starting with one of the brightest talents on the UK music scene, Manchester based trumpeter, composer, arranger and band-leader Matthew Halsall and the Gondwana Orchestra will present music from the new album Into Forever as well as works from When the World Was One and Fletcher Moss Park - Sat 1 October

After their incredible performance at 2013’s Liverpool International Jazz Festival, Mercury Prize and MOBO Award nominees Roller Trio return on Fri 23 October. Propelled to fame in 2012 with their visceral stew of thrashy rifts, tricksy time signatures and rollicking melodies, the trio will be performing tracks from their highly acclaimed second album Fracture.

Then UK composer, saxophonist and band-leader Julian Argϋelles proves why he is so influential to a new generation of British jazz musicians, when his band Tetra come to The Capstone on Wed 4 November as part of an extensive UK tour to promote their new album.

Grew Quartet will take listeners on a musical journey of free improvisation on Tue 10 November with their music ranging from cool, reflective lyricism, high velocity intensity, through to more playful, jazz influenced melodic and rhythmic areas.

Finally, world class pianist and composer Yaron Herman completes the season’s jazz line-up on Sat 14 November. Widely regarded as one of the leading musicians of his generation, he brings his unparalleled style of ‘real time composition’ and wild improvisational flare which culminates in a rare music form that is playful, cinematic and stunning."