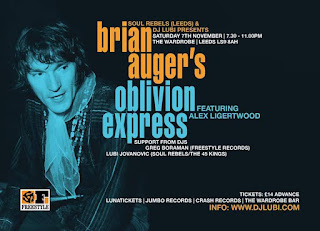 UK jazz and virtuoso keyboard/Hammond organ legend Brian Auger is back bigtime for autumn 2015. The Trinity/Oblivion Express bandleader (and Los Angeles resident), is now signed to a new label (Freestyle Records), and has two new releases out soon via them (“Back To The Beginning : The Brian Auger Anthology” and “Oblivion Express : Live in L.A”). He returns to the UK for a limited 5 date tour in November to promote both of these titles, including this Wardrobe gig.

Born in 1939, he began playing piano as a child growing up in London and quickly gravitated to modern jazz. He was working professionally as a straight ahead jazz pianist in the early 1960s but by 1965, he moved away from this into the booming rhythm & blues scene exploding across the UK at the time. He switched to the Hammond B3 organ in a series of new bands including The Brian Auger Trinity and Steampacket. Musicians in these bands included future UK jazz/blues/rock legends such as saxophonists Alan Skidmore, guitarists Jimmy Page and John McLaughlin, singers Long John Baldry, Rod Stewart and Julie Driscoll.

In 1967, his band The Trinity, now fronted by singer Julie Driscoll scored a UK top 5 hit single with the psychedelic pop/folk cover of Bob Dylan’s song “This Wheels On Fire”. Their debut LP “Open”, released the same year, was a great success and over the next few years they made a big impact both in Europe and the USA, before disbanding in 1970.

Then in 1971 came Oblivion Express, Brian’s new pioneering jazz-rock band. More experimental than The Trinity, throughout the 1970s, Oblivion Express released a series of genre busting albums fusing jazz with rock, blues and soul and were particularly well received in the USA where they consistently charted.

Brian will be playing tracks from his extensive back catalogue including his own arrangements of jazz classics such as "Listen Here" and "Freedom Jazz Dance". At 75 the man still has monster chops on the Hammond and Rhodes!