Autumn jazz in the Boston Spa... 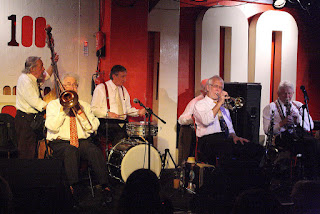 September 2015
5th – Harlem Hot Stompers – the name says it all. Rousing traditional jazz and no prisoners taken by this long time favourite group. Led by Ian McCann on banjo, we are guaranteed a full bore session to lift the spirits and set your feet tapping.

19th – Budapest Ragtime Band – now for something a little different. On tour in the UK, this eight piece band was formed in Hungary in 1980 to perform classical ragtime sounds. Since then the group has expanded its horizons to include string instruments and vibraphone and extended the repertoire to include familiar Dixieland sounds. This promises to be one of those truly special Boston Spa sessions. Be there. £10.

26th – Spirit of New Orleans – to round off the month and a little nearer home we have this Yorkshire based group led by trumpeter Dave Pogson. Always a most enjoyable session, the band displays a wide ranging, relaxed and distinctive style from some of the North’s most accomplished musicians.

October 2015
3rd – Jim Wright’s Rhythm de Luxe – Jim is no stranger to JITS having played here so many times as a swinging member of the rhythm section. On this occasion, he leads his own group in a musical tour of the best of the popular tunes from the Jazz Age, Rhythm and Blues, Country Music and - whisper it – Rock & Roll. Jim will be more than ably accompanied by some of  Yorkshire’s finest - Frank Brooker on reeds, Ron Burnett on trombone, Phil Campen on bass and Trevor King on drums.

10th – Charlestown Jazz Band – a welcome return by this seven piece Dutch band from Nijmegan who played a superb session for us in 2013. Originally inspired by Bix Beiderbecke, the band now reflects the sounds of Chris Barber and the Dutch Swing College but with an infusion of R & B reflecting the likes of Louis Prima and Fats Domino. £10

17th – Savannah Jazz Band – and here again for their last appearance in 2015 are our Yorkshire heroes led by the charismatic John Meehan. A really fun filled session was had in August – we anticipate another to round off this year’s “Savannah Season.”

24th - John Hallam/Jamie Brownfield Quintet – and to bring a slightly different emphasis to the proceedings, we have our favourite reeds player with young trumpet maestro Jamie and a first class rhythm section with Chris Holmes on piano, Jim Swinnerton on bass and Jack Coterill on drums. The programme can probably best be described as “from Dixieland to Duke”.

31st – Brian Carrick’s Algiers Stompers – one for the purists amongst you. Brian needs no introduction to the Boston Spa audience and is in much demand throughout Europe as well as making many visits to New Orleans. The Stompers base their New Orleans sound on the original Kid Thomas Band and its driving, melodic, “stepping out for pleasure style”. £10.

Jazz at the Spa is at the Village Hall High Street Boston Spa, Leeds LS23 6AA