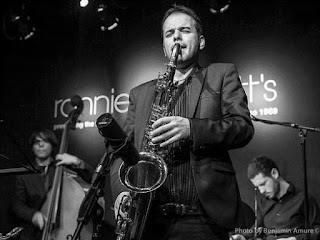 Here are the Autumn evdening jazz gigs at Ushaw College, Durham. We're in the middle of sorting the programme out for 2016 (Which should include a festival!). I'll be in touch with more information when I have it.

Friday 20th November- Northern Monkey Brass Band
Northern Monkey Brass Band (formerly known as Horn Dogs) are a deeply funky collective of some of the finest drum and brass players in the North East of England. Inspired by Rebirth Brass Band, Dirty Dozen Brass Band, Youngblood Brass Band to name a few (as well as that bit at the beginning of Live And Let Die), they formed at the beginning of 2009.  The band have rapidly earned a reputation for lively, energetic shows featuring original music written specifically for the band, classics of the New Orleans brass band genre and well known covers in a way you’ve never heard them.

Friday December 18th – Ruth Lambert Trio
"It's all about the intimacy of the trio. Three voices, each one as important as the other"
The Ruth Lambert Trio takes it's main influence from the early recordings of Julie London's Trio. With the intimate accompaniment of Giles Strong's guitar and Mick Shoulder's bass, Ruth swings, improvises and transforms each song into something distinctive and personal.