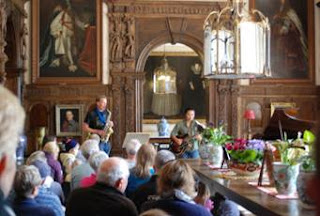 With national award wining artists such as Jo Harman, Val Wiseman, including Alan Barnes and Digby Fairweather and Nicola Farnon performing on the outdoor stages, acts that will perform over the weekend indoors inside the Great Hall have just been announced as follows:

Saturday 11:00am – 5:00pm
Jenny Bray and her Jazz students - Jenny Bray brings her students to the Hall for a show of talent from the stars of tomorrow. Jenny will also be supported by jazz educator Rev Ray.
Saffron Byass - With a stunning voice and a talent for the guitar and piano, Burton Agnes Festival look forward to hearing performances from Saffron's new album in the making.
Samuel McKie in association with the Beverley Festival - Samuel enjoys modern folk, and listens to artists such as Nick Drake, Joni Mitchell and newer artists such as Johnny Flynn and Emily Barker.

Sunday 12 noon – 5:00pm
Gershwin revisited - A tour of Gershwin's greatest songs with festival organiser Simon on sax, Michael Nagasaka and Tom Mellor on guitar, all capped off with Kate Sweeting's beautiful singing.
Ben Beattie - Sax playing Ben will perform solo some of his favourite pieces and own compositions, and will also be showing off his talent and skills on the piano.
Rob Law Trio - Rob is an accomplished piano player who has earned himself a reputation as one of the country's most exciting young artists
Edwina Hayes  Her solo shows are a pleasing blend of well crafted songs, beautifully sung and played, coupled with a natural charm that audiences everywhere find appealing.

This years Courtyard Sessions, which will run during the afternoon on both days, will see performances from local artists Alfie Woods & Meg Waite along with festival regular, and hugely talented, Jacob King.

Tickets are now on sale from here : http://www.burtonagnes.com/Jazz_Festival/Tickets_and_Prices.html  by telephone 01262 490324 (weekdays 9am-5pm), or from any of the shops at Burton Agnes Hall.
Tickets are priced at £70 for the full weekend; children under 12 are free with an adult.
Concessions: OAPs, Burton Agnes Hall members, students and children aged 12-15 are £68.
(Families need only buy one concessionary ticket to cover all their children aged 12-15)
Day and evening only tickets are also available.

‘Possibly the most enjoyable jazz concert I've ever attended’ The Independent