Your gig at Scarborough Jazz? 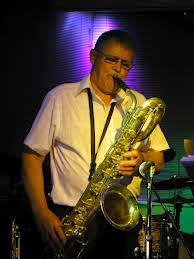 Mike Gordon writes - welcome to our Spring programme 2015! Three of our gigs have been generously sponsored: A J Brown by the management of the Spa, SIV (Sheffield International Venues), and the Heavy Horns and the Hoggard/Jackson Sextet by birthday celebrators Marian Gordon and our resident drummer Mike Hoggard. As we have lost most of our funding this is really appreciated.  Got a birthday coming up?  Feel like supporting Scarborough Jazz? Yes you do!

4 March Julia Wray
Saxophonist Julia Wray is well known and respected on the local music scene. Julia has a wide range of musical influences.  In jazz these include Cannonball Adderley, Michael Brecker, San Grover Washington and Art Pepper.  She will be backed by Mark Gordon on keyboards.  £4

18 March Firebird Quartet
The Firebird is an exciting combo playing contemporary jazz, exciting funky grooves and their own modern take on standards. They deliver enough sophistication for any jazz audience but with a sense of groove that everyone will enjoy. £6 (£5 advance)  www.ianchalk.net

25 March Derrick Harris & Kevin Holbrough
Derrick Harris is not only an in-demand jazz guitarist but he has worked with the orchestras of Opera North and the Halle.  Trombonist Kevin has toured the UK and Europe at major venues and lectures at Leeds College of Music.  MG3 £5 www.derrickharris www.kevinholbrough.moonfruit.com

1 April A J Brown
With supporters including Clare Teal and Sheila Tracy it seems likely that the singer/songwriter/saxophonist, dubbed “Britain’s Buble”, is destined for Stardom. AJ will be accompanied for his eclectic mix of jazz, swing and original compositions, by his own finely tuned trio.  £7 (£6 advance) www.aj-brown.co.uk

8 April Matt Ball
Whilst highly respected as a big band player, and in demand as a soloist, trombonist Matt Ball is also well regarded as a composer and educator.  Peter Elsdon will be on keys for this gig.  £4 matt@gourmetmusic.co.uk

15 April Al Wood
Sax player Al is well known for his ability to play many instruments well. He has graced the bands of Ken Mackintosh and Maynard Ferguson and both the BBC Big Band and The NDO.
Swinging, melodic jazz tonight with The MG3.  £4

22 April Rev Ray, Jenny Bray & Students
Jazz pianist Ray Eveleigh has become very much a jazz educator since retiring from the “cloth” in 2002.  He is well known for his association with Burton Agnes Jazz and, with his daughter Jenny Bray, runs jazz courses there.  Jenny, whilst a fine pianist, is a noted vocalist and music teacher.  Tonight is a showcase of their work and features some of their students.  Expect a very entertaining evening! £5
www.revraymusic.com

29 April The Heavy Horns
Fronted by reed players Jim Corry, Stuart Macdonald and Rod Mason, this six piece are probably one of the most powerful bands you will ever hear at The Cask.  Featuring soprano, alto. tenor and bass saxes you can expect some great arrangements and fine solos from this popular line up.  £5

6 May The Shannon Reilly Trio
Pat McCarthy is one of the UK’s leading guitarists and his musical liaison with vocalist Shannon Reilly is captivating.  Shannon has developed her own style while listening to classic singers like Peggy Lee. Pat has written film and television music.  £6 (£5 advance) www.shannonreillytrio.co.uk www.patmccarthyjazz.co.uk

13 May Jazz Aesthetic
This group, returning to Scarborough jazz by popular request, is an 11 piece band formed of young musicians who are studying at the music department of Hull University. As it is always exciting to hear young players this should be a great evening for the club.  £5.

20 May Pete Lyons
Tonight sees a welcome return to the club of saxophonist Pete Lyons.  A composer  and educator he plays in a wide variety of styles.  He is a major figure in the very successful Sheffield Jazz workshop.  He has a special interest in the music of Lee Konitz and Warne Marsh.  Mark Gordon will replace Mike on keyboards.  £4