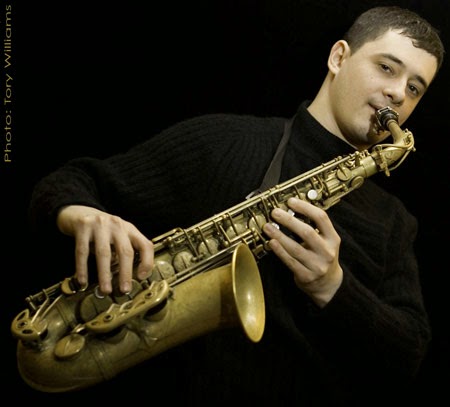 There are just 17 tickets left for this gig!!

Norwegian Marius Neset, appearing with fellow countryman Daniel Herskedal at 2.30 pm on Sat 7th Feb has  just awarded Norwegian Grammy equivalent. Marius Neset & Trondheim Jazz Orchestra were awarded the most important Norwegian music award for their critically acclaimed album "LION", the Spellemannprisen, Norway´s equivalent to the GRAMMY®. The prestigious and multi-genre award was presented in an awards ceremony last Saturday and broadcasted live on national Norwegian television to hundreds of thousands of viewers.

On 30 January Marius Neset will release his new album "PINBALL" (ACT). Besides himself on tenor and soprano saxophones it features Ivo Neame on piano, Jim Hart on vibes, Peter Eldh on bass and Anton Egger on drums and as co-composer. Further guest appearances include classic cello virtuoso Andreas Brantelid, Ingrid Neset on flute and Rune T. Sorensen on violin.

From February 7 onwards Marius Neset and his quintet will be on tour until the end of the year including a gig at Leeds 7 Arts on April 16th.

There are only 23 tickets left for this one at the Winter Weekend at The Royal Clifton Hotel Southport PR8 1RB!!

To book tickets ring SMJC Tickets 01704 541790. Or go on line to www.jazzinsouthport.co.uk to view the programme