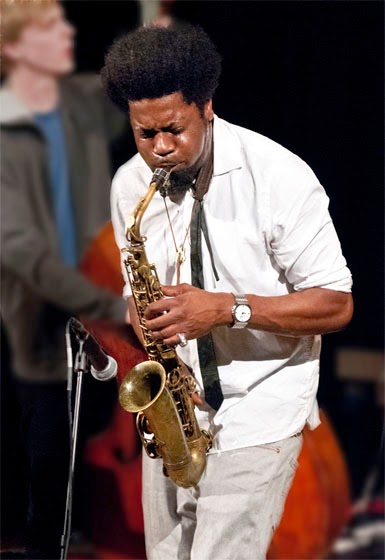 It has been such an exceptional year's jazz - so many highlights for me including Bill Frisell in April and Dave Douglas/Uri Caine in May at The Howard Assembly Room, the double big band concert at Leeds College of Music in November of NYJO & their German equivalent BuJazzO  and a totally unexpected pleasure of seeing community band The Dales Jam accompanying West Riding silent short films at Seven Arts in May.

But how do you say what has been "best" in a place like Leeds where so much jazz is happening all the time?Rather just saying what I thought the top gigs were I'm listing those gigs that have had been the top five over the last twelve months with our audience - by another very imprecise measure, the hits on our YouTube site (which is here).

In reverse order these were

4 Anita Wardell/Dave O'Higgins Quintet 16/5/14 at Seven Arts. Anita really is the best at vocal improvisations and vocalese and her interweaving with Dave O'Higgins effortless flow of  ideas was a joy to see. The gig came about via the Loire Jazz Summer School with the tutor group led by drummer Tristan Maillot; it was one of many tours in the year organised by the NorVolJazz clubs, this one included Scarborough, Leeds and Sheffield.

3 Gary Boyle at Inkwell 16/2/14.  Still the top British jazz fusion guitarist Gary Boyle (ex Isotope, Triple Echo, and albums like Electric Glide) doesn't tour much outside the North these days but he put on his usual stunning display of funk and jazz at our Inkwell venue. Gary really wanted to play Inkwell, a creative space in Leeds for positive mental health, and he just brought the house down.

1 Soweto Kinch/Abstract Hip Hop Orchestra at Seven Arts 23/1/14. The most hits went to a gig by saxophonist and hip hop star Soweto Kinch with the‘The Legend of Mike Smith’. Support was from The Abstract Orchestra, led by Leeds saxman Rob Mitchell inspired by the The Roots and Jay-Z. It was a night of hip-hop, r and b soul, dub, pop and jazz that had the audience on their feet being conducted by Soweto singing along to "Stroke the Hippo"!