Paul Bream's picks of the year... 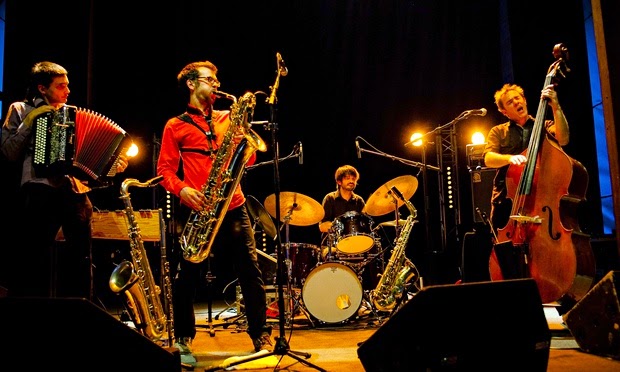 "When a young musician recently asked me for my favourite jazz era, my unequivocal answer was “today”!

That’s partly because of my firm conviction that jazz, as an improvised music, must constantly test out new routes to remain valid and vibrant – listeners (and, even more so, musicians) who yearn for yesteryear condemn the music to be part of the heritage industry rather than a developing artistic force. But I think my thesis is also borne out by the fact that, having been a jazz fan for more than 50 years, I cannot remember a time when there has been so much exciting music being made, embracing such a wide variety of approaches. Looking back over the 70 odd concerts I’ve attended in 2014, I’m struck by just how many highlights there were, each offering a distinctive take on our music.

And that makes it almost impossible to select just three memorable gigs from the past year: how on earth can I compare (for instance) the gloriously extrovert extravagances of the Charlotte Glasson Group with the profoundly thoughtful solo piano of Julie Sassoon? So what follows is not a list of my ‘top three gigs”, but a selection of just three from many, designed to reflect the sheer variety of good things on offer to today’s jazz enthusiast. If I undertook this exercise in a hour’s time, I’d probably come up with a completely different trio.

A lot of the jazz I’ve enjoyed this year came from European groups, but French quartet Pulcinella narrowly get the nod over their compatriots Papanosh partly because their music is absolutely distinctive, and partly because it gives me a chance to also commend the other half of this double bill. Troyka started life in 2009 with an exhilarating mash-up of rock, jazz and dance music, but their subsequent development has seen them introduce more light and shade into their approach, so that this Jazz Café set was a feast of fascinating melodic and rhythmic variation.

As for Pulcinella, theirs is a music that is absolutely up to the minute, yet deeply infused with the spirit and theatricality of bal-musette: the accordion player in particular could have just stepped out of a 1930s Paris Bar. When I first saw them at a festival in Normandy I wondered whether they might be almost too French for a UK audience, but I was wrong. They went down a treat, and had everybody leaving the venue with a smile as wide as the Seine Estuary.

Hype and quality don’t always go together, but in the case of trumpeter Laura Jurd, one of the most talked about jazz artists of the past few years, the latter fully justifies the former. And the same can be said of much praised singer Lauren Kinsella, who combines an exquisite purity of tone with the most extraordinary vocal gymnastics. These two stand out as co-leaders of Blue Eyed Hawk (their trumpet/vocal passages are ethereal magic), although guitarist Alex Roth and drummer Corrie Dick both contribute tunes to the quartet’s repertoire, and are crucial to the tightly knit overall approach.

Describing that approach, however, is tough. This Bridge Hotel gig revealed elements of folk, rock and classical music alongside a deeply felt immersion in the jazz tradition, all beautifully integrated into something of their own that sounded absolutely original – and which drew unstinting praise from conservative and radical audience members alike. When you see a 70 year old jazz fan buy a band tee-shirt at the end of a gig, you know something special has happened. I am that fan, and I’m wearing the tee right now!

It sounds like a recipe for chaos. A 10-piece band (four of them drummers) drawn from the ranks of the Northern improv scene, and including such free spirits as Mick Beck, Corey Mwamba and Walt Shaw . . . isn’t that a template for complete cacophony? Exhilarating, perhaps, but cacophony nonetheless.

Yet under the leadership of Martin Archer this came together as a beautifully structured edifice, within which any number of freely evolving details threw up surprises at every turn. The first piece was typical (if you can use such a term for such freewheeling music): described by Martin as “a medley of everything we have ever played”, it achieved the remarkable feat of sounding tightly organised yet completely spontaneous – a tribute to the way the leader cajoled and conducted the band throughout, while still finding time to contribute some outstanding playing of his own. In fact everybody was at the top of their game, seemingly enthused by the joyous spirit of the occasion. At the end of the evening, the buzz of excitement amongst audience and musicians alike was palpable. Two months later I’m still buzzing!"