New Year Jazz at the Cinnamon 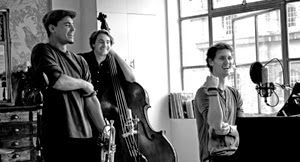 Some lovely jazz dates coming up after Christmas

Friday 16th Jan Chris Standring
Continuing to find fresh, dynamic ways to break new ground in contemporary jazz 16 years after seducing us with his debut album Velvet, the versatile composer, guitarist and producer lets the groove – along with his loyal archtop Benedetto and Fender Stratocaster - do all the conversing on a set that bridges old school R&B/soul-jazz with a trippy, soundscape rich, ultra-contemporary electronica vibe. Lounge £20.00

Friday 30th Jan Dinner Jazz with Stevie Williams
We kick off our series of dinner jazz with a top band that have cemented their place in Cinnamon hearts. Stevie leads the way on bass and vocals, Dave Hassell on the kit, Mark Cresswell on guitar and Billy Buckley on guitar/slide/lap steel. A blistering lawless band that deals out forgotten songs, vintage blues, modern and classic Americana all with an alt- country edge and sheer class, accompanied by a gorgeous meal. Lounge £30.00

Thursday 5th Feb Sue Barron Jazz Quintet
Sue Barron is a local singer who has been performing with her band of excellent musicians in the North West and beyond for a number of years, and they have performed at the Cinnamon Club many times. The repertoire is a mixture of Jazz Standards, some lively latin numbers, some familiar more contemporary songs and beautiful ballads. Lounge £10 (members free)

Friday 6th Feb The Magic Beans
The Magic Beans are a band with an ear for a quirky cover and have the imagination to take it in a completely new direction. Also incorporated into the mix are some rootsy originals that draw influence from folk, jazz & world music traditions. Uli Elbracht & Matt Owens are self-effacing accompanists: they provide minimal velvet for the jewel of Zoe Kyoti’s voice, which is magical in its smoothness, nuance and tenderness. They have performed throughout the UK with appearances including The Manchester Jazz Festival, Rainow Jazz Festival & Zeffirellis Ambleside. Lounge £10 (members free)

Saturday 7th Feb Theo Jackson Trio
While his heart belongs to jazz, Theo Jackson’s soul lies in music which has the ability to cross boundaries and genres, appealing to a wide audience. A storyteller by nature, many of his songs are observations of people from his home-town of London. Newly signed to US label Dot Time Records, this engaging and charismatic British jazz songwriter will be releasing his first album in April 2015. "Shoeless and the Girl" features 10 original songs, ranging in approach from jazz arrangements to solo piano and voice.  The album will also feature an adaptation of Wayne Shorter's 'Footprints'. £10.00 (members free)

Friday 27th Feb Mike Walker & Stuart McCallum
Two of Manchester’s finest guitarists get together for a gig that will be a joy for all their fans. Differing styles “mesh intuitively” says Mike Butler who has followed these musicians for years. “Anything McCallum can achieve by synthetic means, Walker can replicate with nylon and blood. McCallum proposes chilled-out bliss; Walker offers sublimated yearning. Well, don’t say synthetic; say rather electro-acoustic, which fits the music to a tee. Other pairs of opposites spring to mind: bitter-sweet, yin-yang, introspective, and, well, introspective. Anything but aggressive” Mike Butler