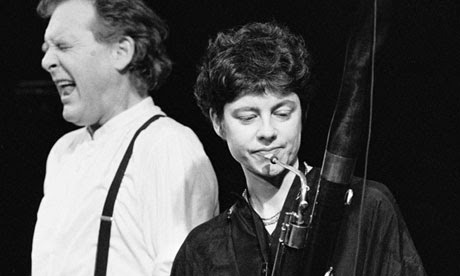 Huddersfield Contemporary Music Festival (between Fri 21 and Sunday 30 November) is devoted to new and experimental music and always has some jazz input among it's events. This year is no exception with a specially reformed avant jazz rock band "Henry Cow" playing the music of Lindsay Cooper plus saxman Evan Parker with a 12 piece group and singer Phil Minton with double bassist Simon Felll

Henry Cow play the music of Lindsay Cooper - Saturday 22 November Lawrence Batley Theatre Huddersfield 7.30pm
Lindsay Cooper was a celebrated bassoonist who died in 2013 from complications arising from multiple sclerosis. Between 1971 and 1997, she had took key roles in the influential avant-rock bands Comus and Henry Cow and in Mike Westbrook's jazz bands; gave solo recitals on bassoon and saxophones; and composed for theatre, dance, film, and jazz and contemporary-classical ensembles all over the world. Seminal progressive rock band Henry Cow have been reformed for this special occasion and will be playing Lindsay's Music for Films/News From Babel/Oh Moscow.

To celebrate Evan Parker’s 70th birthday year, HCMF has commissioned the world premiere of Twelve for Twelve Musicians by Parker. ‘Since the dodecaphonic revolution, 12 has been a special number in new music. In my ‘composing’ with 12 elements I am exceptionally fortunate to work with 11 other musical individuals. The piece starts and ends with their musical genius as instrumentalists and as improvisers.’
Evan Parker.

Evan Parker saxophones, Sten Sandell church organ / keyboard
'This project follows on from an album I made with Sten Sandell in 2010. In Sten's hands the church organ, while retaining the solemn gravitas you expect, turns into a whole symphony of sounds - flute-like, drones, violin quartet dissonance, and much more..! I am keen to work with this range of sounds again, and to create a series of new works that will fully utilise the range and dynamics of the individual spaces.'
Evan Parker. Free event