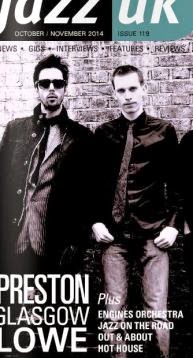 As most jazz promoters will tell you, putting on the music successfully is not easy. Any publication that helps spread the word is to be supported and cherished. So an announcement today makes it feel a bit more chilly out there....

On 21st November Jazz Services announced they are to cease production of JazzUK immediately from the last November issue. Jazz UK will be sorely missed by jazz clubs and independent promoters. In it's heyday it was the bible of gigs taking place in the country - where everybody looked and knew they could find out easily what was going on. It hasn't been like that for the last couple of years and putting the "gigs" section online was in many people's eyes the beginning of the end for Jazz UK, as it has now proved with withdrawal of Arts Council Funding.

JazzUK’s editor John Norbury-Lyons said, “It’s a shame to have to close the magazine in its current form after so many issues, as it’s been a great way to communicate the amazing work done by so many of those involved in the UK’s jazz scene, as well as Jazz Services’ own activities.  But Jazz Services has to change, and now the organisation has to focus on making those changes to ensure it’s still in a position to support the jazz scene going forwards.  Prioritising time and resources is a necessary part of that process, and unfortunately this means JazzUK has had to close.

“I hope that in its own way the magazine has helped contribute to the success of the artists, promoters, broadcasters, writers and others featured in its pages, and I’d like to take this opportunity to give my sincere thanks to everyone who’s been involved in its production over the years.  In the meantime, the discussions with Jazzwise magazine are very encouraging and hopefully there will yet be a future for the JazzUK name as Jazz Services continues to evolve.”

"Over past few years JazzUK has enjoyed an extremely productive partnership with Jazzwise magazine to produce monthly live jazz listings, available on the Jazz Services website as the digital guide "Gigs" as well as in the print edition of Jazzwise and on Jazzwise Magazine’s website and app.  As part of the more collaborative model proposed for Jazz Services in the future, discussions are currently in place to expand and develop this partnership further, with more details to be announced as they are available".

Let's hope for the sake of Jazz Promotion everywhere that he's right...