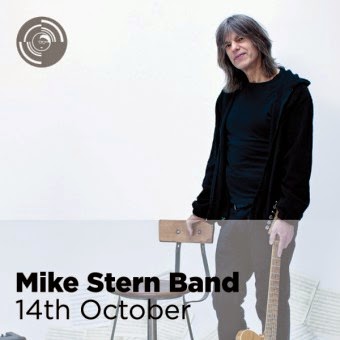 Since his days with Blood Sweat & Tears in the mid-1970s, followed by stints with Billy Cobham and Miles Davis’ band in the ‘80s, and a solo career that now spans more than 25 years, guitarist Mike Stern has used his jazz roots as a starting point for exploring a range of alternate territories that include R&B, rock, swing, funk, world music and numerous other regions along the musical topography. The recipient of Guitar Player magazine’s Certified Legend Award for 2012, he’s an artist who’s not afraid to bring numerous styles and ideas – however diverse – into the same place just to see what happens.
£20

Grammy award winning saxophonist and composer Tim Garland has illuminated the UK music scene for 20 years.For years now, Tim Garland’s playing and composition have less reflected ‘influences’ than styles he has mastered – everything from Celtic music to Yellowjackets fusion, from free improvisation to classical performance, from ECM ‘third stream’ to left-field electro acoustics. After two years in the making between much international touring and time away from the UK, Garland celebrates ten years of “Lighthouse Music” and a deserved place once again as band leader.
£15