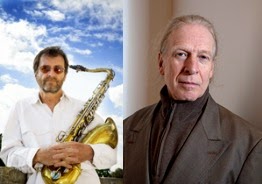 Four of the UK's leading jazz performers tour Tim Whitehead's new work commissioned by the London Jazz Festival last year. This celebration of London's great river and Turner's lifelong relationship with it is a journey through eight locations painted by the great English artist. The suite is based on improvisations made by Tim at each location - when he was filmed by filmed by Mike Dibb, who is well known for his Channel 4 films on Miles Davis and Keith Jarrett.

With Roger Beaujolais on vibes, Robin Aspland on piano, Julian Bury on bass and Winston Clifford on drums

The celebrated vibraphone player, Roger Beaujolais, was born in Harrogate - but left for the south of England after two years ("It wasn't MY idea," he insists); still, the 22nd November IS his birthday and it seemed a suitable occasion to bring vibes into the Crossley Gallery for the first time ever.

Expect melodic swing, Latin-pulse hard bop, some funk and some blues. Here is Dave Gelly's review of Beaujolais's last album in the Observer: "With a long career taking in jump-jive and acid jazz along the way, Roger Beaujolais has quietly emerged as an essential player on Britain's jazz scene. His technique on the vibraphone is masterly, and his mature style is so broadly based that he can switch from funk to delicate ballad in an instant, without the least strain. His choice of material reflects this, including numbers by Wes Montgomery, Chick Corea and Milton Nascimento, along with three of his own, all arranged with deceptive simplicity."