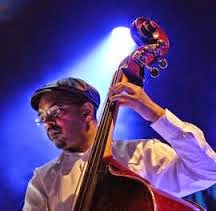 A mid-week notice of a special gig at the University of Sheffield, on Tuesday 21st October at 19.30pm, Firth Hall Sheffield - the same line-up that played at Millennium Hall in January this year now revisits Sheffield to explore resilience and resistance in the anti-slavery and Civil Rights Movement.

Bassist Gary Crosby, a pioneering jazz talent and one of the UK’s most important bandleaders brings his phenomenally talented young band Groundation to Sheffield.  Along with Dr Rachel van Duyvenbode (University of Sheffield School of English) and Professor Brian Ward (Northumbria University) we revisit the path to freedom, from 18th and 19th century slavery through to the 20th Century Civil Rights Movement.  Join us as the people, the personalities and events are remembered and reimagined in stunning new jazz arrangements.

Gary Crosby describes Groundation as a ‘group discussion’ between himself (double bass), award-winning hornsman Nathaniel Facey (alto sax) – well-known to the SJ audience through his fine work with Empirical -  together with rising stars Shirley Tetteh (guitar) and Moses Boyd (drums). The band use progressive jazz with some Afrobeat accents interspersed with thoughtful ballads to create an exceptional experience for audiences.