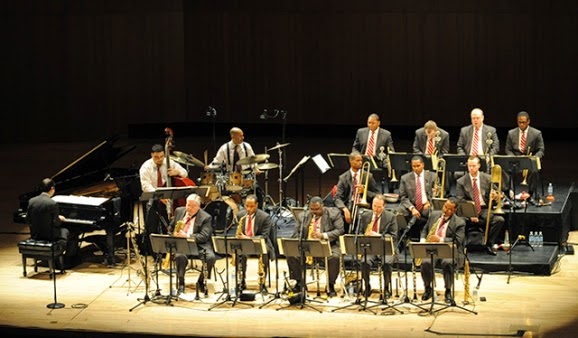 Sometime the Jazz press can be a bit sniffy about trumpeter Wynton Marsalis, almost as if his success and universal acclaim is unacceptable in a jazz world where celebrity is rare. At Harrogate on Friday night we heard why he's so acclaimed. He's a phenomenal bandleader no doubt, but he's no figurehead - his solo on Herbie Hancock's "Riot" for example took your breath away for ingenuity and dexterity.

The mission of his Lincoln Center Orchestra is to entertain, enrich and expand the audience and interest in jazz, something they've been doing for 26 years now. On this European Tour their various members have recrafted and rearranged some classic (and some lesser known) tunes from Alfred Lion and Frank Wolff's Blue Note record label. The opener was a tribute to the Horace Silver who passed away a couple of days earlier - "Senor Blues", arranged by the band's superb bassist Carlos Henriquez, was played with feeling and love for the music of one of jazz's legends. "The Thespian" by Freddie Redd, "Infant Eyes" by Wayne Shorter, "Search for Peace" by McCoy Tyner and Bud Powell's"Un Poco Loco" were given intriguing new forms The playing was phenomenal - Ted Nash on Woody Shaw's "Moontrane" showed just how to build a solo, Dan Nimmer's piano on Horace Silver's lovely "Peace" also stood out for me.

And Wynton was funny - classic anecdotes - about Lou Donaldson for example. The Harrogate audience (including a large number of younger jazz fans) applauded loud and long. Well done to the Harrogate International Festival for taking the risk and putting it on - the Royal Hall was packed. BBC TV were there to record it - watch out it when it is broadcast later in the year. Especially the encore - Wynton with just the rhythm section playing "Embraceable You" - worth the price of the ticket alone!